Or I went on a weekend trip to Rome. My friends were even willing to give me my plane ticket so I could hide behind them. Did I not write that a better environment does not start with yourself? I did not want to be a moralist, but I had also written that flying is the fastest way to heat the earth, and since then I have made it a point to avoid the airport as much as possible. Partly helped by the pandemic, I managed to stop it. If everyone would follow my example, the climate crisis would be solved in no time. Applause to myself! 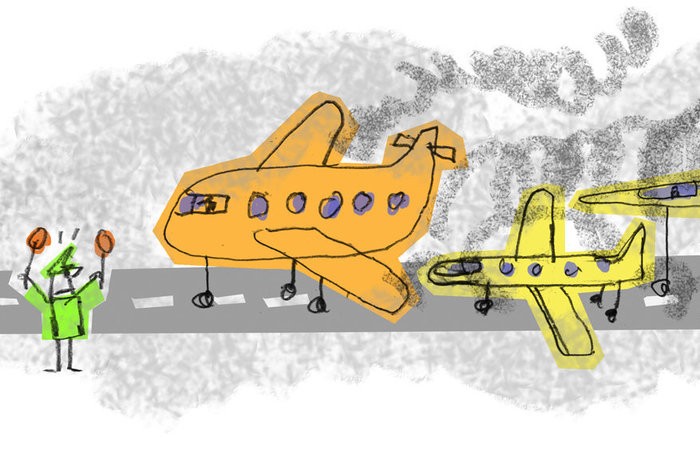 While looking for a Amsterdam-Rome train ticket (at least 22 hours of travel), the director of Lufthansa said his airline had 18,000 ‘unnecessary’ flights this winter. The planes were too empty to be profitable, in fact they should have stayed on the ground, but then Lufthansa risked losing its coveted take-off and landing rights. The logic is difficult to find from both an economic and an ecological perspective.

Fortunately, there was also good news: KLM issued a press release stating that it is taking the next step in making aviation more sustainable. Anyone departing from Schiphol takes off in an aircraft with at least 0.5 percent Sustainable Aviation Fuel (SAF) in the tank. The ticket price therefore increases between one and twelve euros depending on the travel class and distance. Those who are willing to pay extra can increase that percentage further. For a flight with completely ‘sustainable’ fuels, the surcharge would be between 200 and 2400 euros, calculated sustainability specialist Thijs ten Brinck. And even then, you are not yet traveling climate-neutral because the combustion of biopetroleum still releases some CO2.

It is a lasting promise: technological innovation will ensure clean aviation. Politicians think this is only too happy, as Simon Dequeker described not so long ago, while the reality is, to say the least, more unruly. Seen in a second, the innovation in aviation is impressive. Aircraft have become more efficient and streamlined in recent decades, which has reduced the CO2 footprint per capita. passenger. Nevertheless, total emissions from air traffic continued to grow, for the simple reason that passenger numbers increased rapidly.

The book will be published at the end of this month The blue fable by Ties Joosten. ‘s journalist Follow the money examined – subtitle – ‘why we have kept KLM in the air at all costs for a century’. In the last chapter, he considers the biggest challenge that the aviation sector still faces: the climate crisis. KLM’s sustainability strategy is to continue to grow. Growth provides money that can be reinvested in pure technology. ‘There are a few reservations about this strategy,’ Joosten states dryly. The next generations of aircraft will probably be even more aerodynamic and the new engines even more economical. Who knows, maybe we can even fly on green power or hydrogen in the long run, but before such breakthroughs have become the norm, the aviation sector will have long exceeded its greenhouse budget.

As a short-term solution, airlines are happy to turn to biokerosis (read: old frying fat). The problem with that is that there is simply too little of it available. KLM is now patting itself on the shoulder to add 0.5 percent SAF, but it sounds much less impressive if you know that our ‘blue pride’ actually aimed to be at one percent biokeros in 2015. Joosten therefore comes to a sober conclusion: ‘No technological innovation can bring aviation within the climate system boundaries in time.’ Flying smaller remains the motto, but as long as discount airlines advertise round trips for a few tens and the airlines can make a nice decoration with transparent greenwashing, even the biggest moral knight will not reverse the trend.