‘Wouldn’t it be better if I wrote something about organizations that bring Arabs and Jews together?’ Dara Bazelet tries to look at what is happening in Israel and Palestine through the eyes of those who live there. “We’m talking about a small area, “a scorpion pussy”but the most complex in the world. ‘ 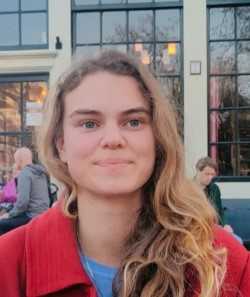 From Baselet– Basel as in basalt, basalt – grew up in Amsterdam and spent a number of childhood years in Israel. Today she is studying Writing for achievement in Utrecht. With a father from Be’er Sheva, a mother from Sneek and grandparents from Poland, Lithuania, Syria and the Netherlands, she is a child of the world. This finds its way into multilingual plays, travel stories and personal reflections.

Eand years ago I was standing in a room full of hungry people. Bowls full of steaming meals were placed on a long table. Everyone’s eyes were bigger than his stomach. Couscous, stuffed courgettes, dough cups with honey, I stacked it all up. Soon we would break the fast with a glass of water and eat all night long.

My brother and his Syrian friends had not eaten anything all day for weeks. With my full plate, I sat down on the carpet. Before we touched, Kasem whistled to attract attention. He spoke to convey the value of Ramadan to us. Ramadan is very important, but that evening, being together was paramount.

This year I see my family in Israel for the first time in years. My grandmother has been preparing for it for two weeks now felted fish, pickles and matzo balls. The atmosphere is very reminiscent of a Ramadan evening. Everyone talks, eats, helps in the kitchen, everything seems to go by itself.

Meanwhile, we take turns reading from Haggadah. We sing about this evening ‘halayla dis†† which is unlike any other night, ‘yoshvim ben ochlim weben metsubim ‘, ‘we are between eating and talking’. Tonight we celebrate the liberation from Egypt. All in the name of freedom.

My niece talks about getting into the military as something tough and with status.

In my family we quarrel a lot. No one has the same opinion and everyone likes to scream. My niece first complains about her stubborn uncles, and not much later, she fiercely defends herself to her cousin that the scouts are really not fascist. According to him, the scouts are a mini-army.

My niece tells me she’s looking forward to the army. She is sixteen and has to wait two more years. If she was not so scared, she would join the armed forces. Her face glows as she talks about the exciting period. She is not talking about killing Arabs. I do not even think she has considered that it could be a part of it. She prefers to talk about it as something that is tough and has status.

When I lived in Israel as a child, despite my father’s ideals, I also silently looked up to the military. Beautiful, young, confident people who radiated power. I had especially seen them in Jerusalem. Once upon a time, a group had even come to school. They ran across the basketball court in their dark green uniforms and everyone cheered on them.

I imagined my father exactly as he told heroic stories about his military service. He wanted to scare us with it, but in Holland I did not know a single father who had walked miles through the desert, who had stood in the snow one white night, and who had eaten alcohol-soaked fruit on the kibbutz at. weekends until he had fallen down.

A generation later. My brother and I are going out to Tel Aviv the day after Easter. In the center we meet Dutch friends of my brother. A group of Jewish students who often visit here. There are relatively few people in Tel Aviv due to the attacks that have taken place in recent weeks.

We go to an outdoor club further from the center, next to the beach. The moon full, the dance floor full, the bottle empty. Yallah, Lets dance. A dancer dressed as Cleopatra swings her arms into the starry sky and I dance with her as if the world could end anytime. As Tomer Yosef sings: ‘Ani rote lazuz, eltoch halayla ‘, I want to move into the night.

And the night flies away.

He looks my brother straight in the eye and tells me that he shot three Palestinians in the head.

When people trickle out, we sit on a bench for a while. David tries to order a hot dog among the pressing Israelis. A boy is chatting with me. He says he is in the armed forces. One of his friends giggles that he wants to flirt with me. Somewhere in the conversation, it appears that he is voting for Netanyahu.

My brother joins the company. It’s two to five. One of the boys is standing right in front of him. I squeeze in and scream that Arabs are human too. He looks my brother straight in the eye and tells me that he shot three Palestinians in the head.

Land with olives and vines

The next night I sit next to my grandfather on the couch watching the news. A man tells in Hebrew with a heavy American accent that he no longer dares to take the bus. Young boys, Palestinians according to the voiceover, enter the picture, throwing a bus in motion with stones. A car stops to block the bus. They manage to smash the windows. Some passengers are affected.

Immediately after filming a trembling camera, how three orthodox Jews with gray beards are attacked by young Palestinians. You fall to the ground and get more kicks.

The news anchor then tells of a 15-year-old Palestinian girl who stabbed a man several times with a knife. Footage of the girl in an elevator, her face blurred, she screams in panic. Her father said she had seen videos of clashes between Palestinian protesters and Israeli police at the Al-Aqsa Mosque just before the attack.

Someone is screaming. It is quiet. The smoke dissolves in small clouds. I see the boy lying motionless.

He tells me in a phone call how he grew up in a culture close to Jewish culture, speaks a language close to Hebrew and then Israeli television. The first time he heard about the war was when he woke up one morning, five or six years old, to see in the news a little boy hiding under his father’s arm and being shot.

I have a very clear picture of it in my head, even now that I’m talking about it. A clear picture that stuck. I have it, all Palestinians have it.

There they stand, father Jamal and his twelve-year-old son Muhammad, up against a wall. Zoom in. Muhammad presses against his father. Jamal tries to protect him with one arm. The scream increases. He lets go for a moment, makes a gesture and shouts something I can not see where.

The next moment white smoke and the sound of bullets. Someone is screaming. It is quiet. The smoke dissolves in small clouds. I see the boy lying motionless on Jamal’s lap.

Yusef says that his father worked in Tel Aviv, just like many people in Shetach C. During high school he also started going to Tel Aviv. Some of his friends have Israeli documents and can travel legally to Israeli territory, he even travels illegally. He met Israelis, even fell in love with an Israeli with whom he started a relationship.

In Shetach A and B and in the refugee camps in Bethlehem, people do not come into contact with Israelis so easily. The only Israelis the inhabitants see are soldiers.

The hatred that Palestinians often feel towards Israelis is because of what they see around them. Because of the image of al-Durrah, of the soldiers, of the Israelis they do not know, of the discrimination they live in and feel.

My grief is seen but not understood.

We’re talking about peace. Yusef says we’re talking about such a small area, pussy of a scorpion in Arabic, but the most complicated in the world. You have hated the discriminatory Israeli government, the terrorist Hamas, the corrupt Palestinian Authority, on both sides. Nothing resembles peace.

Fred, I do not think in this word anymore.

Maybe if Palestine is liberated first. He thinks no further than that. In his gaze I read hope colored by a sad pessimism.

When the French ask him to tell him about Palestine, he does not talk to them. When I try to talk about the problem of Dutch people without a migration background, I understand what is holding him back. My grief is seen but not understood. My opinions are measured on the knowledge of Israel and Palestine and on the opinion of the media without any frame of reference. 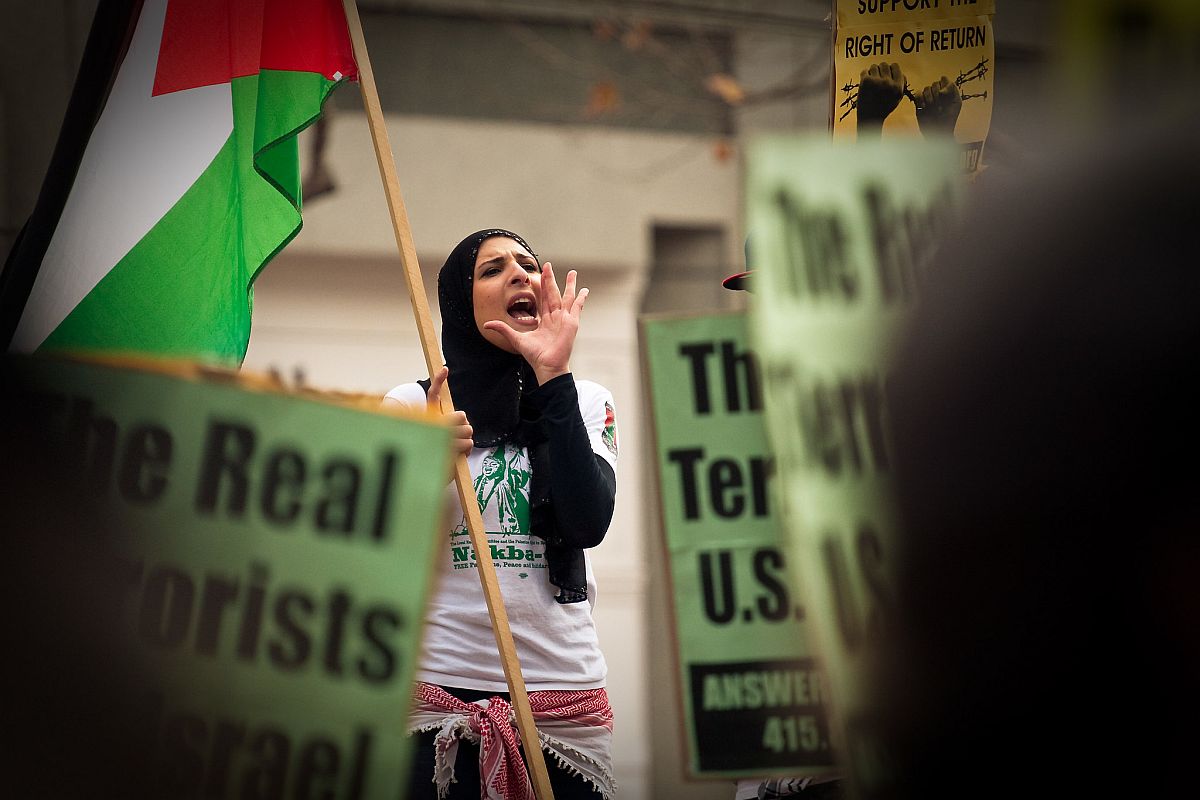 Arabs and Jews, on the other hand, are at the mercy of their own specific frame of reference: Israelis in the occupied territories are growing up with Palestinians throwing stones. Palestinians who are not allowed to move freely in their country. Media, school, family, history. Israelis who have never tried to start a conversation with a Palestinian and vice versa.

And yet my father asks me if I should write something about organizations that bring Arabs and Jews together, Yusef tells me what it’s like to grow up in Palestinian territory and a religious woman advocates in the documentary Naturally born settlers that we must refrain from looking at politics, that we ourselves must take the initiative by meeting each other.

If I look closely, I find small steps born of despair, but search for the word both nations greet each other with: shi salam. Peace.