Waamelinks came closer for Rutgers through his wife Inge Wielens. Her mother was Truus Waamelink, a younger sister of Jan and the youngest daughter of Johan. At a party to celebrate Inge’s 60th birthday last year, the idea for a book about his wife’s uncle and grandfather arose.
It was the start of months of research for Peter: “What else do you know, and what paintings are still in Inge’s family, with cousins? What other people have known the painters and perhaps have paintings or know where works are? Many phone calls and visits followed. ”

The months of searching and talking gave him a lot: he tracked down dozens of works by Johan and Jan and got an idea of ​​what it was like for some people and how their lives went. Especially with his in-laws, photo albums and other material came to the surface, which managed to bring Waamelinks to life with the retrieved memories. “Grandfather Johan turned out to have been a sharp man, stubborn and emotional. There was no one around it: his less beautiful sides were also discussed in his prayer card. “
Marianne Mulder-Wamelink from Groenlo is the daughter of Jan and the niece of Inge. She assumes that her grandfather’s restlessness, that emotionality, may stem from his desire to have been a painter altogether. Instead of doing it on the side of being a house and decoration painter.

42 works found
From 1924 Johan Waalink had a painting company on Beltrumsestraat in Groenlo, since 1933 on the site where Albert Heijn now stands. In 1920, Johan – from Keijenborg – started working as a painting assistant at the Groenlo painting company Wicherink, owned by the grandfather of the current Groenlo painter Bert Wicherink.
Through questions on social media, Peter learned even more about the painting father and son. Via the Facebook page Ij bunt ‘n real Grolsen als … Marga Geerdink, daughter of the former Groenlo blacksmith Jan Geerdink, told that Waamelinks also made paintings as payment. In this way, a painting by Johan may also have ended up with the Gunnewijk family – opposite the former Van Waamelink painting company.
The network has expanded further in recent months. Paintings appeared not only in Groenlo, but also in Keijenborg, Hengelo Gelderland and Zelhem, and also outside Achterhoek throughout the Netherlands, in Zevenaar, Ommen, Alkmaar and Breda. Two paintings by Johan even turned out to have ended up abroad: one in Belgium and one in Germany. The (preliminary) final position is 27 works by Johan and 15 by Jan, mostly paintings but also a few stained glass windows, all in private ownership. In the paintings, it is striking that they painted both on wood and on canvas. 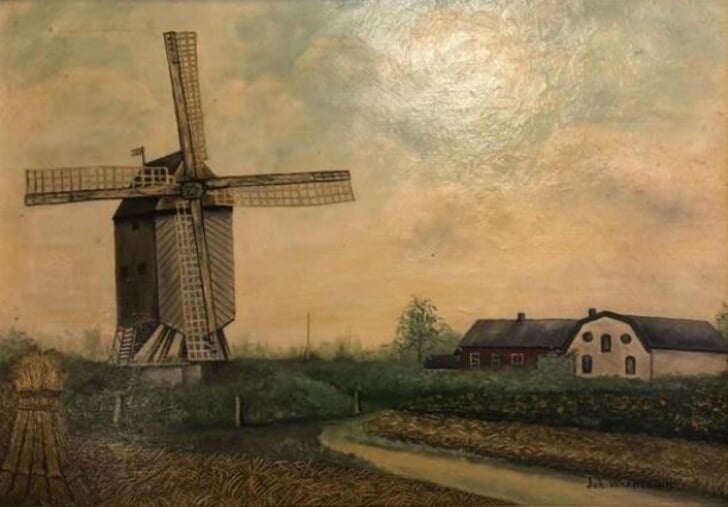 Johan was the better painter
Through his research and writing of his book, Peter Rutger’s father and son Waamelink got to know each other better and formed an opinion about their personalities and their pictorial qualities. “I knew Jan, my wife’s uncle, personally, but he never talked about his paintings; I have not seen her grandfather Johan. Through conversations and interviews, especially within my wife’s family, I have of course learned more, but one must be careful not to psychologize. ”
He sees clear differences between father Johan and son Jan, in their personalities and in their painting: “Johan was the youngest in the family where he grew up, Jan was the oldest, he felt more responsible, was more calm. As a painter, I really appreciate his father, he painted beautiful landscapes and farms in Groenlo and the surrounding area. ” Johan and Jan were not the only painters in the family, several descendants have also made paintings or still do, some of their works have also ended up in the book.

Waalinks are part of cultural history
What does Peter think is the significance of his forthcoming book? “It’s the first inventory of the paintings of the two. I do not know if I have been able to trace them all, but many. By the way, they were all untitled, I give them titles in my book. I, it is great that there were also house and decoration painters in Groenlo, who also turned out to be painters.I believe and hope that my book can contribute to the cultural-historical writing of Groenlo, in addition to, for example, the pictures on Scherp in Beeld site, the information from Grønlo Archaeological Association, Bygården and Bymuseet The paintings of both Waamelink also show historic Groenlo and its surroundings.Disappeared situations come ‘back to life’, not only in Groenlo, by the way, they also painted elsewhere in Achterhoek . ”
In the book, which is in the final phase, all the works found by Johan and Jan Waamelink are printed, in addition to many other pictures. Rutgers wants to add Waamelinks to a (still) short list: “In the early twentieth century it was more common for house painters to paint art. Beltrum knew his Jan te Loeke, Zelhem his Frans Storm, Bredevoort his Gerard Wensink and “Eibergen’s Herman Abbink. These painters have been written about before and their works have been exhibited. My research and book make it clear that Groenlo can also be included in the list of places with forgotten houses and painters.” 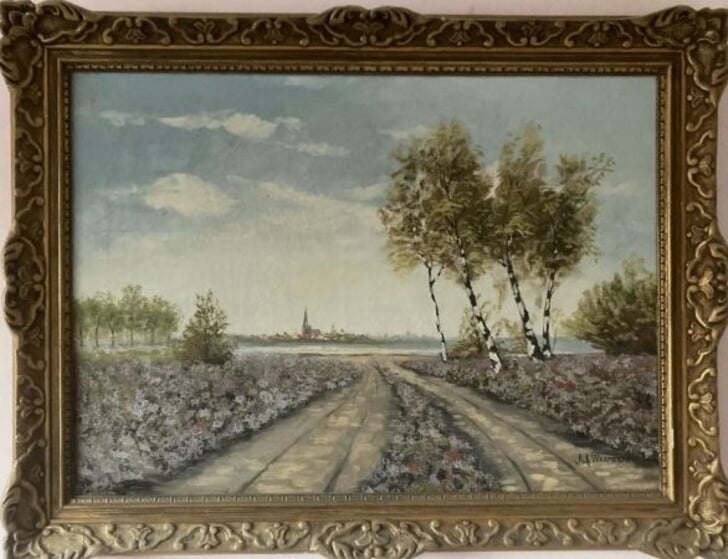