“To have discussions (…) is one thing, but (…) to intimidate by committing crimes is beyond limits ….”

What? Another action from radical farmers? Or coffee-drinking conspiracy theorists? No, this time Christian Geselle, the mayor of Kassel, is reacting to actions against Documenta 15, which is accused of anti-Semitism.

Even before the opening (June 18), the most important art event in the world was under fire. In January, the Association Against Anti-Semitism Kassel (BGA-Kassel, Bündnis gegen Antisemitisme Kassel) objected to the participation of a Palestinian art collective. BGA-Kassel’s motto is “There is no anti-Zionism without anti-Semitism”.

In April, an exhibition space was covered with stickers with texts such as “Freedom, not Islam! No compromise with barbarism! Fight consistently against Islam! ”. In May, a break-in took place in the building where preparations for the Palestinian art collective were underway. The room was spray-painted with cryptic texts such as ‘187’ and ‘Peralta’.

The “187” is a reference to a California law of murder. ‘Peralta’ refers to the extreme right-wing Basque activist Isabel Medina Peralta, who in 2021 participated in a training session with the German neo-Nazi group ‘Der III Weg’.
This was perceived as threatening, after which the Kassel mayor came up with the reaction with which we started this article (source).

Not that it led to any peace. The accusations that Documenta would support anti-Semitism sparked debates in the Bundestag. Eventually, Documenta was forced to cancel a series of discussion evenings.

Another low point in the entire edition is the removal of a large canvas that allegedly depicts two anti-Semitic caricatures: a soldier figure with a pig’s head and “Mossad” on the helmet and a figure who would identify a Jewish Orthodox man and whose hat “SS ” is written. In response to the criticism, the canvas was first covered, later completely removed.

Before we continue: in this video the work is discussed and the offensive caricatures are shown:

It is about the work ‘People’s Justice’ by the Indonesian collective ‘Taring Padi’. It was established in 2002 and symbolizes the atrocities committed by the Suharto regime. Certain countries that supported the regime at the time were also portrayed in a caricature-like manner.

The collective notices the heated discussion in Germany and gives a public apology to anyone who feels affected. In a statement on their website, they write:

We have misrepresented a possible involvement of the Government of the State of Israel. Anti-Semitism has no place in our hearts and minds.

Then the collective goes deep into the dust:

We deeply regret the extent to which the images of our work “People’s Justice” have offended so many people. Our apologies to all viewers and the team of documenta fifteen, the public in Germany and especially the Jewish community. We have learned from our mistake and now recognize that our imagery has acquired a certain significance in the historical context of Germany. Therefore, together with Documenta 15, we have removed the banner from our exhibition.

‘Taring Padi’ means ‘Rice plant’s teeth’, the sharp tips of the plant’s leaves. The plant has developed these dots as a defense against enemies such as grasshoppers and other insects. The artist collective has made it the symbol of ‘the power of the people’.
The collective makes printed matter (woodcuts), sculptures, murals and banners. They also work with the well-known Javanese puppet theater, street theater and punk rock and techno music.

The text of this mural: ‘keep the land, guard the forest and the sea, for the future’. At the bottom it says: ‘Dedicated to the people of Jogja ora didol (Jogja is not for sale).
Jogja ora didol is an artist movement that reveals the tourist development in Yogyakarta through murals. Among other things, they are campaigning against the flattening of affordable housing, which is being replaced by expensive hotels. 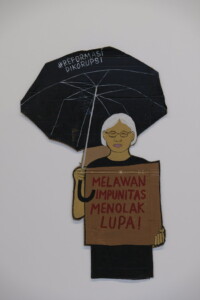 Reformasi Dikorupsi was a protest movement that made seven demands to the government in 2019. Among other things, put an end to impunity for human rights violations.
With a portrait of Maria Catarina Sumarsih, co-founder of Aksi Kamisan (the black umbrella movement). She is the mother of a student from Atma Jaya University who was killed by police bullets during the Semanggi protests in 1998. You can read an interview (2011) with her here. 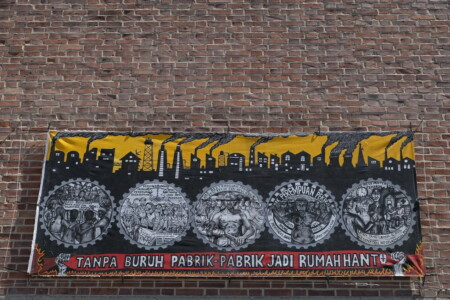 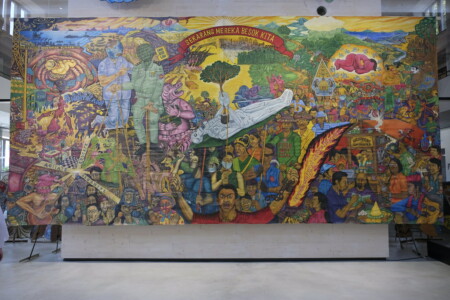 Documenta 15 runs until September 25 and has a completely different set-up than previous editions. Curator is the Indonesian collective Ruangrupa, who invited artists and collectives from Asia, Africa, Latin America and Oceania. Also with a number of Surinamese-Dutch artists.