Almost fifteen percent of all land on Earth is currently used for arable farming. We are expected to feed ten billion mouths in 2050 – two billion more than today. Should we cut down more forests for it? Growing more food per square meter can be a more sustainable idea. Better varieties, measured fertilization and control of plant diseases help, but there is an alternative: higher up. By growing crops compactly in tall buildings, cultivation takes up ten to twenty times less land. And it may not even be necessary to hang lamps, American research shows.

Normally, a plant uses sunlight for its growth during photosynthesis. The plant takes water (H2O) from the soil and carbon dioxide (CO2) from the sky. Under the influence of (sun)light, these substances are converted into oxygen (O2) and sugars. Sugar is food for the plant. The oxygen produced by the plant is released into the air.

But plants need light to grow, right? In fact, they need light for photosynthesis, the process by which they produce CO .2 and convert water to sugar for their growth. Artificial light is an option, but lamps consume huge amounts of electricity. American researchers have recently found a trick that makes plants no longer need light at all.

The nutrient that the scientists give the crops, acetate, must first be made in the laboratory, from, among other things, CO .2 and water. This is done with electricity generated by solar panels. The acetate then converts plants into sugar for growth. In this way, the researchers grew algae and lumps of tissue from lettuce. The next step is to grow a full head of lettuce or other crop.

It seems rather difficult at first sight to use electricity to mimic the first step of photosynthesis, instead of using it for artificial light. But solar panels convert sunlight into energy much more efficiently than plants. Plants use only one percent of all the solar energy they collect for their growth. With the new method, it is up to four times more. Although those solar panels still need to be produced first, of course.

The energy savings through diversion of photosynthesis have a chemical cause. “Normally, plants attach six individual carbon atoms that originate from CO2, together to form a larger sugar molecule”, says Sylvestre Bonnet, professor of photochemistry at Leiden University. “The new method makes it easier for plants: the researchers feed the plant’s building blocks, which consist of two carbon atoms. Plants then only have to hang three building blocks together, which saves energy.” 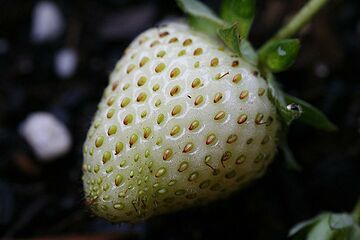 Strawberries grown in the dark will not have an appealing red color because the plant will not make certain pigments. 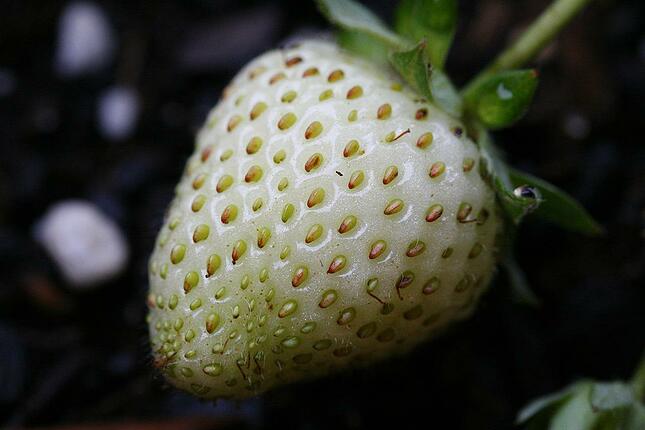 Yet sunlight does more than just ensure growth. It stimulates the production of green pigment in the chloroplasts, where photosynthesis takes place. If you place a houseplant in a corner that is too dark, the leaves will turn yellow. The same happens with crops in the dark. “The production of other pigments that give plants red, blue or purple colors is also strongly stimulated by light,” says Wageningen food chemist Wouter de Bruijn. Without light, we therefore do not get beautiful red strawberries or purple aubergines, but less attractive yellow-white varieties. It is also not yet known whether the taste, texture and quality of food grown in the dark is equal to crops as we know them today.

Leo Marcelis, Professor of Horticulture and Product Physiology at the University of Wageningen, may have a solution to this. He believes that the new technology could perhaps be used as an aid to existing indoor agriculture. On such farms – or vertical farming – growers grow crops with LED lighting and simply regulate growth factors so that less water, fertilizer and pesticides are needed. The main disadvantage of traditional vertical farming is that the LED lamps consume huge amounts of electricity. “With the new technology, we might be able to grow crops with lower light intensity, so much fewer LED lights are needed,” says Marcelis. This saves procurement costs and power, while color, texture and quality are likely to be preserved.

Nevertheless, we should not aim all arrows at one method, say the Dutch experts. “We can improve arable use through several routes, and it is always advantageous to explore them at the same time,” says Marcelis. His colleague Lucas van der Zee adds: “The American scientists’ research is still new. It’s an interesting question because scientists have been trying to improve photosynthesis for decades. Maybe growing plants in the dark is the future, but further research is needed first.”

Sunlight currently forms the basis of our entire food pyramid. With this new technique, we may in the future be able to bypass this basis and thus produce more food on less land. Who knows, our global consumption may then be in line with what the earth can provide.