Rotterdam – Bospolder-Tussendijken (BoTu) has its own WijkMuseum. Councilor Simons officially opened the ‘doors’ to the WijkMuseum BoTu on Friday 26 August. The WijkMuseumBoxes collection, prepared by the directors of the WijkMuseum, gives the neighborhood a sense of recognition and pride. “We are now making history,” said one of the residents.

The opening of the museum took place in front of Bollenpandje in Rosier Faassenstraat, an important place in BoTu. The object, veiled by a red cloth, stood in the middle of the pavement. Almost a hundred interested people attended the launch and waited anxiously: what would the museum look like?

Before the official moment, Nuevos Tangos Viejos, a music duo from the neighborhood, warmed up the crowd with their South American repertoire. Nel, a committed local resident, also paid tribute to the neighborhood with the song ‘Delfshaven’, straight from the heart. People who knew the lyrics sang along with her.

change stories
Nicole van Dijk, director and initiator of the Wijkcollectie Foundation, the engine behind the museum, spoke with presenter Art-Jan de Vries about the importance of the WijkMuseum. “The museum is about stories that create change. From people who have moved on from adversity. They didn’t wait, but found they had to do it themselves. Everyone has a story worth sharing. It can be lifted onto a platform.”

Visitors see the seven MuseumBoxes, each of which provides a personal view of life and people in the BoTu district. Photo: per

Help each other
This was an important reason for Councilor Simons to clear his agenda for the opening. “Telling stories about what’s happening in your neighborhood is about ‘helping each other.’ It’s very nice,’ he said enthusiastically. We create the city together. I am glad that Rotterdammers are developing initiatives like this. It is important that we all bear this together.” He responded politically to the question from the public whether the councilor could also promise more financial resources. “I will discuss it in the council,” he promised. 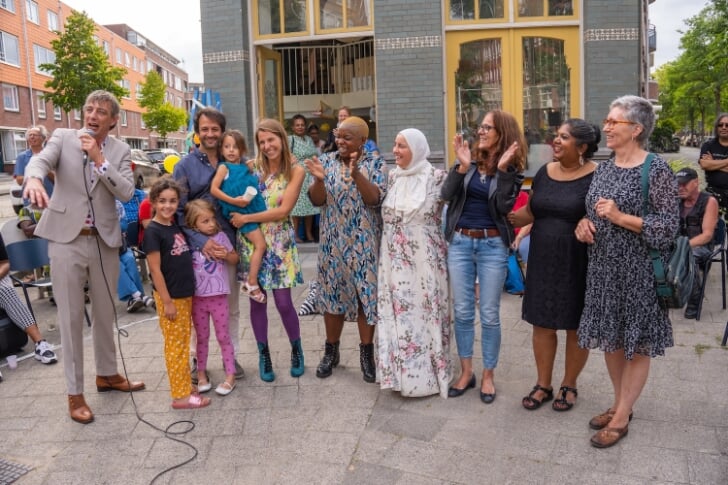 Presenter Art-Jan de Vries in conversation with six of the seven museum directors. Photo: per

The collection and the stories
The first directors of the district museum are Angela Renfurm, Houria Tourich, Luisa Maria Dos Santos Gonçalves, Maike Dassen, Mirre Valkenburg and her children, Sharmila Lalaram and (grandfather) Jacques Stoppelenburg. Together with the councilor and Nicole van Dijk, they organized the official opening. A bicycle appeared under the canvas with a special baggage: neighborhood stories. Seven in total. In a creative and artistic way, the museum managers have collected their personal (life) stories with a link to the BoTu neighborhood in boxes attached to the bike as a diorama. “With the boxes, the storytellers have created a reduction of reality,” said artist Frans van der Horst together with Van Dijk, the museum’s architect. “What happens around the museum is the most important thing. I wonder if that will lead to conversations that otherwise would not have taken place.”

Thanks to the ‘wheels’, the collection can be easily placed and viewed anywhere in the district. And the construction with boxes makes it very easy to change or add a neighboring story. “The museum always goes further. That is why we are also looking for new directors,” says Van Dijk.

Pride
The WijkMuseum is a surprise every time. The first museum visitors fed their eyes a good meal and returned home with a smile and a sense of pride. They recognized the feeling: this is what I too am a part of, whatever I encounter, whatever I want or whatever I contribute to. Neighborhood work is essential for liveliness and resilience. WijkMuseum BoTu will encourage this, wherever and whenever. One local resident summed it up aptly: “We are now making history”.