He emphasizes that the company focuses on open technology and products. As many developers often do not know, they often work with development software optimized by Intel. According to Lavender, ninety percent of developers work with such software, but Intel has actually been (too) silent about it. According to the CTO, open ecosystems give developers more choices. He quotes Linus Thorvalds: everything you add to an open source project is multiplied. 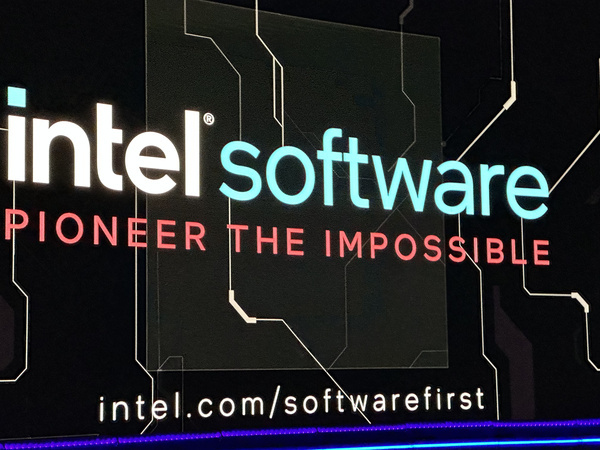 Intel is very active in the software world, but not everyone knows that.

He also discusses IPDK and SPDK, two development kits. With IPDK, it is possible to implement intelligent network adapters such as the IPU E2000 from Intel to perform tasks of the network adapter and thus offload the processor. An example is shown in the exhibition part of the event, where a system manages to handle twice the number of Kubernetes microservices thanks to the smart adapter. 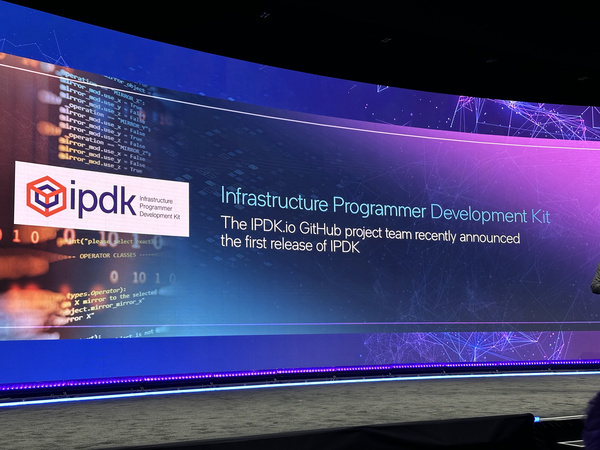 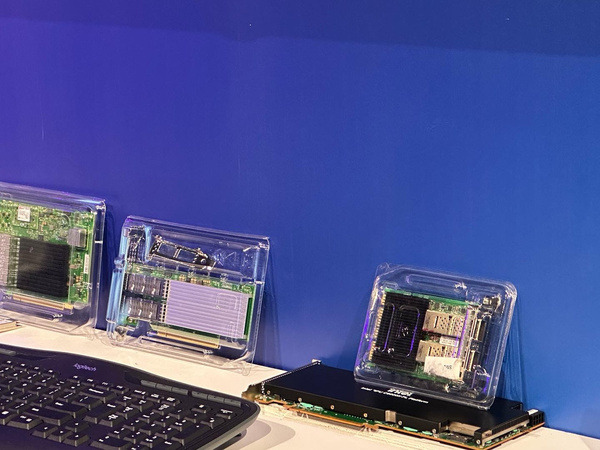 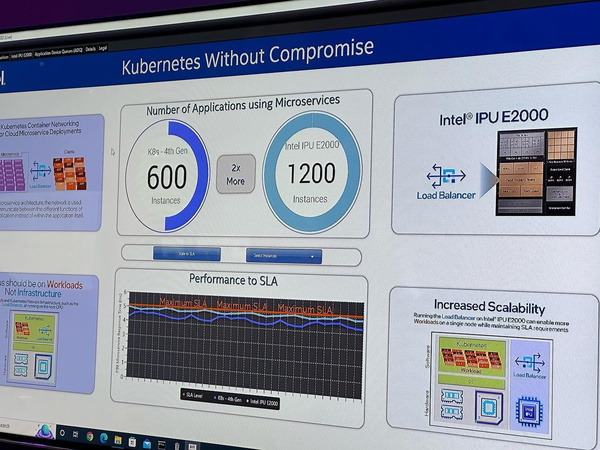 With SPDK, it is possible to use NVME-based SSDs in a smarter way. 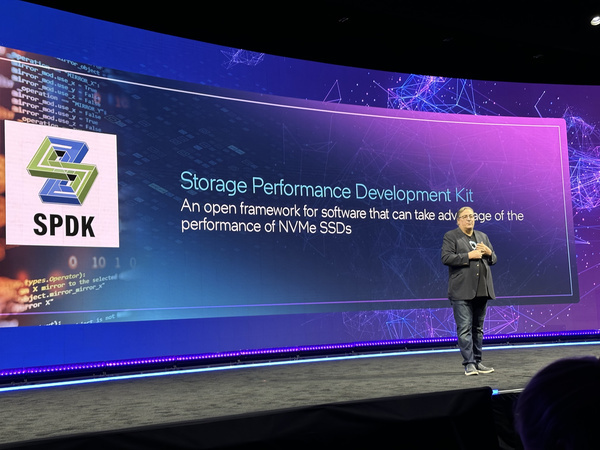 Lavender continues on Open accelerated computing. He thus points out that Intel is about competition at the hardware level, but not at the software level. It should be possible for developers to develop once and run on everything. One of the examples is that it offers an alternative to Nvidia’s CUDA with the open SYCL. There are even tools available that can convert CUDA to this open environment.

By using oneAPI it is possible to run the same code on Nvidia, Intel, AMD and ARM processors and GPUs. This makes it easy for developers to determine what type of architecture the code works best on.

The presentation goes further into AI. According to Lavender, one of the challenges is that we collect a lot of data, but it is still difficult to get relevant insight. One of the main things the company relies on is the availability of open AI platforms. The company has now made a new OneAPI SDK available for healthcare. This can be downloaded via Github.

Harmen van der Linde presents the new Intel Developer Cloud. With this new environment you can see here. The focus will be on giving developers access to pre-release hardware and software from Intel. Harmen says that the new Flex and Ponte Vecchio GPUs are available i.a. Habana Labs Gaudi AI processor is also available. The new cloud should also offer opportunities for software performance optimization. 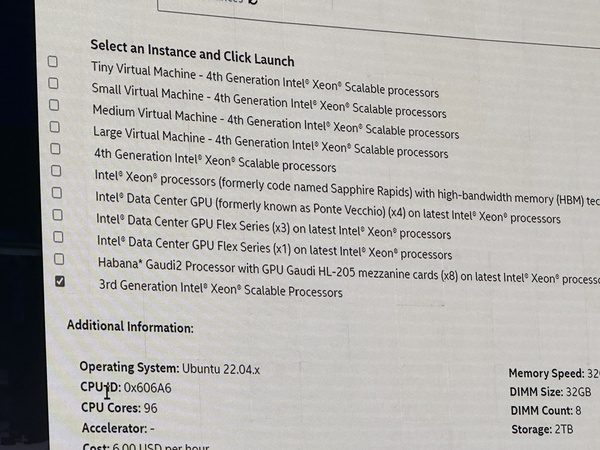 You can get started in the Developer Cloud with the latest products from Intel.

Lavender goes further into quantum computing. Intel is the only company focused on silicon-based qubits. To be commercially relevant, the systems must contain one million qubits. He shows a quantum wafer, and he also shows the horse-back controller that can be used to communicate with a quantum computer. In addition, the Quantum SDK is presented. This makes it possible to simulate a quantum computer on a regular Windows PC. This allows you to get started with quantum code at home. 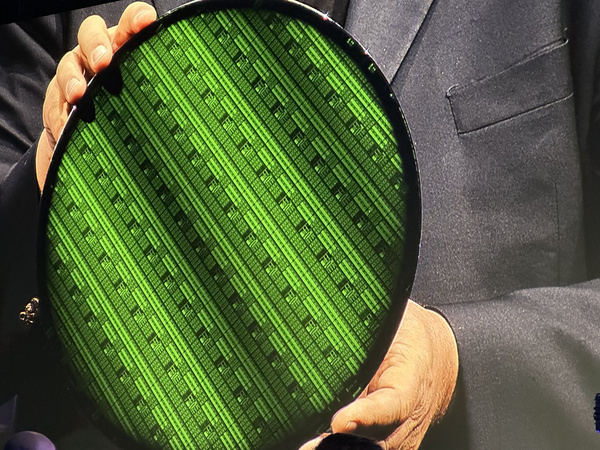 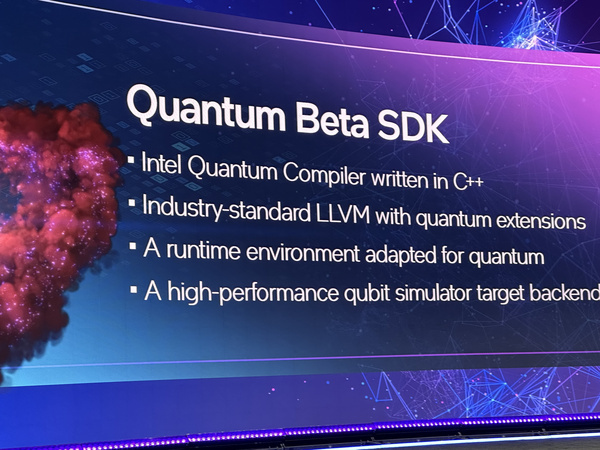 Developer Cloud is not ready, do you have to pay or is it free? What is the business model? It is a combination of a free and a paid version.

How should developers think about quantum? We want to make something scalable, it’s not going to be a device that you can put under a desk just yet. We are working on connecting a quantum computer to the Developer Cloud. Quantum computers won’t be here for five or ten years. Quantum computers pose a threat to many of today’s encryption methods. Therefore, it is important to review the current encryptions now and see if they can withstand the computing power of these new computers.