Summary of the article

You come across more and more fundamentalist views about Corona. It is like that on all sides. It’s more like a religious war. Let’s hope for an “enlightenment period” where measures are no longer imposed from above and everyone can make their free – informed – choices, respected by others.

Read the full article: The New Wars of Religion

Two pictures from this weekend

In the tweet and image below, two of my recent articles come together in an absurd way. One was about the birth of new religions and the other about the Corona phobias.

And this lady really isn’t the only one in the US who leaves the house with this mouth mask (and also wears this mask indoors for part of the day).

So that one article was about how we’ve seen the rise of new religions over the last 2.5 years. People have fundamentalist views regarding their attitudes about Corona, which is very similar to the way strict orthodox treat their religion. It ranges from those who believe that everything must be done to ensure that no one gets a Corona infection, to those who believe that you will definitely be dead within 5 years if you are vaccinated against Covid-19. And every shred of information they share serves to substantiate the correctness of their position. Any kind of substantive conversation is impossible.

These religions also have their own thanksgiving prayers. This is their standard tweet from the group expecting all health from the vaccination if they got Covid. It really seems to be a kind of standard prayer as it happens in many religions before and after eating. Thanks to Supreme for the food. The “prayer of thanks” for this group is shown below, this time tweeted by a representative in the House of Representatives for a New Jersey district.

The second article was about the new phobias that have arisen in the meantime. Such as people who simply no longer dare to enter indoor spaces between strangers without wearing at least one FFP2 mask. If you still don’t know which mask it is, then you should take a look at this special picture. It was taken last Saturday during the congress of the German Young Greens in Bielefeld (more than 100 kilometers from the Dutch border). There was also a 3G access scheme. Only if you had been through the infection within the last 3 months did you not need to be vaccinated or test negative. 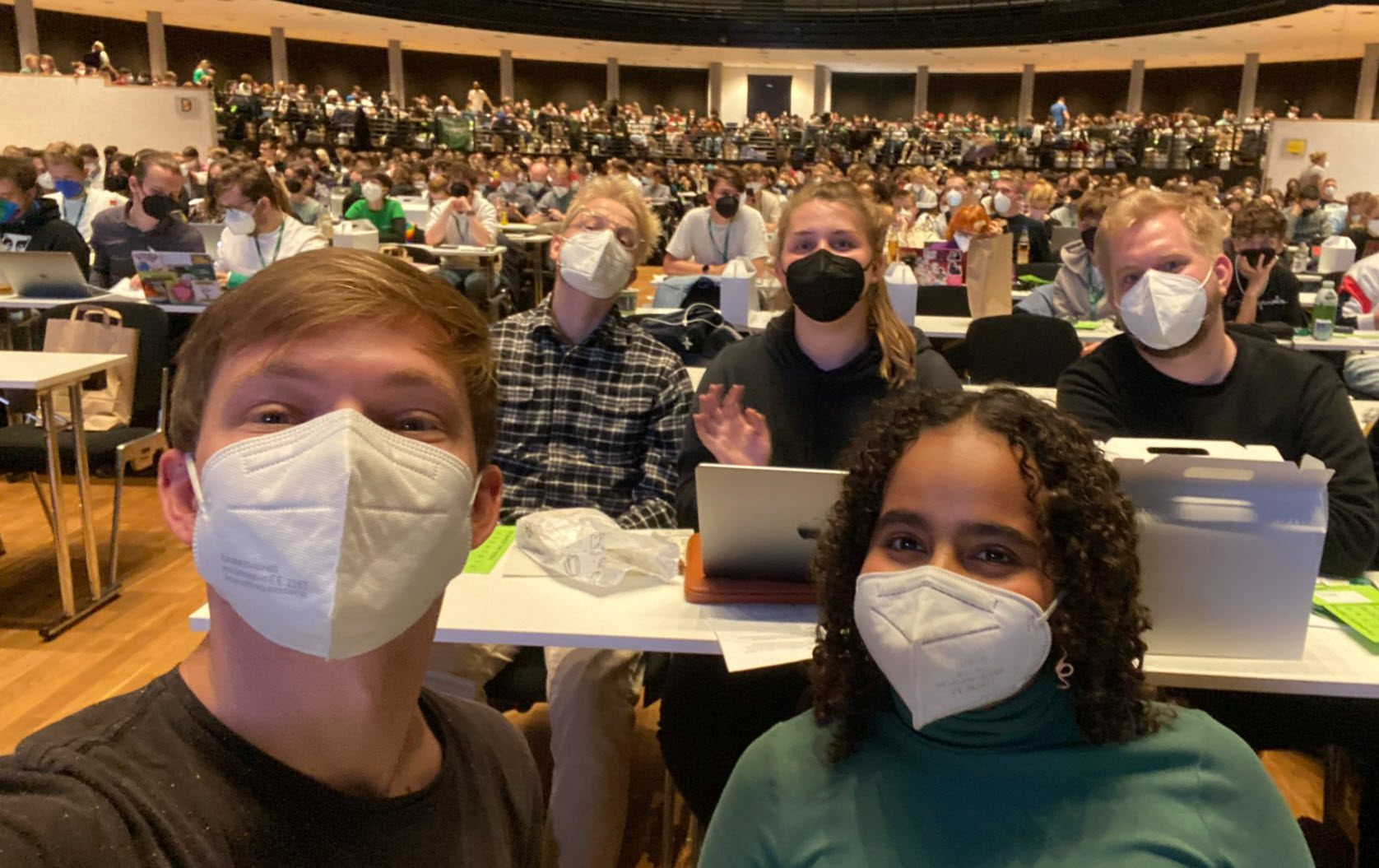 So pay attention to what you see here:

(It’s like having sex on your 50th wedding anniversary, the man uses a condom, he leaves the church to sing, while the woman also takes the pill just in case.)

But if you belong to an orthodox religious group, you don’t question the rules of that group, but you submit to them without a murmur.

When I follow the media, both traditional and newer, I have the impression that I am only dealing with a battle between religions. So not only the Zero-Covid movement (of which the lady in the top picture is a kind of “poster girl”), but also those of those who are diametrically opposed to it. They face each other in the same way that Catholics and Protestants faced each other in the seventeenth to nineteenth centuries.

The available information is used very selectively, the data collection and analysis is only used to substantiate one’s own views. In doing so, you would hope that scientists and other experts would play a relativistic role and have an open debate about the different views, but these experts seem to choose between only two variants:

What is also remarkable is that these new religions seem to have their own national variations as well. For example, we see that the new booster vaccinations in various Scandinavian countries are only recommended for the older age groups (Norway has now raised the limit to 60 years, while Denmark has it to 50). But with the Dutch variant of this religion, 12 years is still the lower limit.

I continue to try not to convert to any of these religions and to make choices based on the information I have that is not biased. Although you should always remain critical of yourself regarding the possible bias. And I will continue to share all the information with the readers here. Not out of the desire that you think exactly the same as me and make the same choices, but that you get information from which you make the choice you think suits you. Without throwing yourself into the arms of some preacher.

Yes, this autumn the number of Corona cases will increase sharply in our regions (and if you look at the numbers, you can already see that increase). And yes, people will also get very sick and even die. Plus, there will also be people who will continue to suffer from that infection for a long time.

However, I already described in 2020 that Corona outbreaks and flu outbreaks apparently do not take place at the same time. In Australia last winter season we saw that this did not happen. One after the other, as was the case in the Netherlands in March/April this year. Fortunately, the chance of getting very sick with the Omikron variant is much less than it was in 2020. It was clear from the development in South Africa with the Omikron variant last December that it is not primarily because the population was mostly already vaccinated , but because of the mutation itself.

This means that the balance of the population’s disease burden this autumn-winter from corona and/or influenza is not greater (or more) than for influenza and the other winter viruses for 2020.

In addition, we should have learned the following in the past two years:

The consequences for society of these actions were negative in all possible areas and we will continue to have problems because of this for a long time to come.

We should turn away from all these religions and follow only one approach: individual choices about how best to handle the risk of infection from Corona.

An important role is reserved for the professionals to whom the individual wishes to attach great importance (such as the general practitioner).

But we must stay away from a government or a society that demands that you behave in a certain way in certain places, as is already the case in Germany. Let’s call this “enlightenment”, after the stage in history when we broke free from the rigid demands of religion.

Because if we start again in the autumn and winter, as we have done for the past two years, it will have major social consequences on top of the major problems we already have/are having. Not to mention the diminishing trust in the government and doctors.