Artistically, a continuous immersion for the 38 minutes that Hawaiians thought a nuclear missile would strike would have been stronger. But politically, their VR would have been without influence, the decision makers realized.

Putin’s repeated threats using nuclear weapons turn VR into a documentary The morning you wake up (to the end of the world) by Mike Brett, Arnaud Colinart and Steve Jamison, which can be experienced in Eye as part of the program Cinema Ecologica: Three foolish days, even more painfully current. While human error and faltering systems, which their VR actually refers to, have probably been a greater risk in recent decades – given all the Cold War near-launches that have since come to light.

But because they always ended without an explosion, we all fell asleep on the subject. And that is why Putin’s threat hit us hard.

But not as crude as the alarm text that all 1.4 million residents of Hawaii received on January 13, 2018 at seven past eight in the morning. Full text: ‘Emergency Alert: BALLISTIC MISSILE THREAT IN HAWAII. SEEK SHELTER IMMEDIATELY. THIS IS NOT A SHORT.’ The capital letters are from the original. It took 38 minutes before the alarm was withdrawn. False alarm, we know that now. But the 1.4 million inhabitants did not know that during the 38 minutes.

An attack was not at all unthinkable. In the months before, mutual nuclear threats between Trump’s America and Kim’s North Korea had become increasingly rampant. In addition, in times of war, Hawaii is an obvious target as a US military command center in the Pacific. Think of Pearl Harbor.

But the 1.4 million inhabitants didn’t think much of Pearl Harbor. They thought about the people who speak in the documentary, especially their families. Your dear ones. Their relatives. A missile would take about 15 minutes from North Korea. What do you do during that time?

What do you do when your two children are in different places – and you know you can only reach one of them within 15 minutes?

What do you do when you run with two small children to a relatively sturdy building, only to be denied entry there because it is already full?

What do you do if you are—I’m not making this up—a Hiroshima survivor who has come to Hawaii and now receives this message?

What do you do when you come from Hawai’i, now study nuclear arms control at Princeton and suddenly get texts from the islands asking friends what to do? And that with all your knowledge of politics and technology you have no answers for them? Or yes, one: nothing. There is nothing left to do.

It’s an incredibly powerful true story, and it’s only natural that the creators, who started with a more general idea of ​​a VR about the dangers of nuclear proliferation, saw the potential in it to make the abstract, incomprehensible threat of nuclear war concrete. and personally.. You cannot listen to these stories without thinking: what would I do myself?

But it is only stage one of the three-stage rocket – if I may use this metaphor here – that the creators had in mind. The morning you wake up (to the end of the world) consists of three chapters. The first is about the islanders’ direct experience during the 38 minutes. The second provides general information about the dangers of nuclear weapons. And the third, concluding chapter indicates a direction in which the solution can be sought.

That the VR experience itself also lasts exactly 38 minutes is therefore more or less a gimmick; the part where you as a VR user experience the fear of the expected rocket impact lasts only about 12 minutes.

Not so long ago I would have written something like this. VR would have been emotionally and artistically stronger if the first, menacing part had lasted a full 38 minutes, completely immersed in the residents’ experience as they experience it. Without the reflection afterwards from the realization that it had all turned out well. The first chapter is by far the strongest of the three; the sequels with more information and prompts, while technically impressive, are by definition more distant. But the creators wanted to do everything and therefore did everything partially and nothing completely.

In the VR technology, the transparent point cloud environments (here supplemented with stylish floating triangle environments) that appear and disappear dream-like, show themselves again as a convincing spatial representation of the floating indifference of memories. The video-scanned characters in it, video-scanned as photo-realistically as possible, detonate – because how state of the art As this volumetric video is, we’re really not there technically yet: you end up looking at somewhat empty, flawed approaches to real people.

It’s as I wrote on the occasion of the last VR program at the Venice Film Festival: If you can’t get it naturalistic enough, go for impressionistic. The fact that the people being filmed turn out to be actors (because covid made it impossible to film people in Hawaii), as the creators explained in an interview, also feels a bit like cheating. 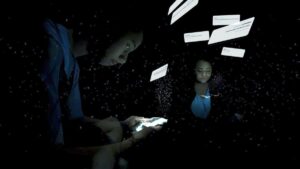 I wanted to write that. And that wouldn’t be a lie. But in recent years I have moved from a form of film criticism based solely on artistic, dramatic and philosophical criteria to one that takes political significance into account. Because the alternative version I propose above of 38 minutes of sympathy for the Hawaiians and their imminent end would at most attention of the problem – noble, in itself and necessary, but also insufficient. Because what to do with attention without factual knowledge and without perspective for action?

Therefore, I understand the choice of decision-makers for the three-stage rocket: personal, political, practical. First grab yourself personally – which works very well in the first part – and then hopefully renew your interest in the political information that follows (how many of those weapons do we have, what would such an explosion in Hawaii trigger, et cetera) and finally, so as not to send you home, despairing and discouraged, reach out to you for action.

Incidentally, this approach to the documentary is not much different from how The correspondent trying to renew journalism. Because: like journalism, a documentary not only offers reflection on reality, but also constitutes an influential part of it. And throwing people over a bucket of misery and then sending them home without hope is not neutral – it is as much politics. Because it leads to a dangerous social cynicism.

I therefore have great sympathy for the set-up and ambition regarding The morning you wake up (to the end of the world). The biggest problem is that it’s too short – 38 minutes is a decent length for a VR experience, but too short for a documentary on a subject like this.

For the second chapter, which touches on the scale of the nuclear problem, it is not so bad – everyone knows that the risks are enormous. But those who do not already think in terms of an intersectional decolonization struggle against derailed individualism and the military-industrial complex will not be convinced by the few sentences devoted to it in Part Three. As activist Ray Acheson says, “So many people are affected in so many ways by this while excluded from the elite debates about nuclear weapons. By accepting and amplifying the voices of women, LGBTQ groups, communities of color, and indigenous peoples, we can have a different view of it,” not unjustified, but the nuclear proliferation connection really needs more explanation to outsiders. own parish.

But the fact that the few Hawaiian words in the title poem by co-author, activist and academic Jamaica Heolimeleikalani Osorio, with which VR opens and closes, are not translated, in my opinion, is a justifiable exclusion of those who do not understand Hawaiian (a comparable ‘ exclusion within immersion’ also contained VR Ferenj). Because leave this one element alone for those who are listened to too little. It is precisely for this reason that I and others who are not of the indigenous population of Hawai’i realize that we are guests there during this VR and that they have the most ancient rights. Also check out the comments on the Oculus Quest page The morning you wake up, whereupon several people who experienced the incident themselves praise VR as an important testimony. Not only about and on behalf of them, but also for them.

For that, as part of the intersectional approach, the native Hawaiians, who feel unheard by Washington, are asking for space for their own ideas on the subject, based on their own culture and traditions—for that, I must assume, will most users of this technically convincing, substantively meaningful and politically relevant VR certainly understand afterwards.

The morning you wake up (to the end of the world) | 14 to 23 October | Eye Film Museum, Amsterdam