“Everyone can see us.” Friday morning at Makassarplein. In rain and wind or under a hot sun, an ever-longer line of people waits on the street for a package from the food bank in East. Is there no alternative?

Buurthuis Archipel opens its doors early every Friday morning for customers and volunteers of the food bank. The first customers are allowed to sit inside for a while and have a coffee. Around eight o’clock, two trucks arrive with almost two hundred boxes filled with non-perishable goods, such as rice and pasta, canned food, sauce, gingerbread, coffee, tea, flour and also candy, soda and chips. There are also separate boxes with household items or care products. And birthday packages for all children who have a birthday that week. A little later, trucks with dairy, vegetables, fruit, bread and meat arrive. The drivers are volunteers, just like the people who stand ready to unload boxes and fresh goods on the street and quickly count: What can we give away today and how much is it approximately per customer? The distribution starts around ten o’clock. Sometimes later because there was so much to unload.

Not all the large quantities of fruit and vegetables are usable. Everything must therefore be carefully examined first. The customers are already standing in a long queue – in the square, in the public space – to go past the tables set up. First get your name checked on the problem list, then on to the different tables; put your box of non-perishables in your own shopping bag and then move on to vegetables, fruit, dairy, etc. On the good days, there’s choice and plenty of choice, when no more than two apples per person are missing. a family and very little dairy. The package is for two to three days. If there is food left over, it goes to the Happy Neighbors project, which cooks with food that would otherwise not be used and provides free meals throughout Amsterdam.

Every customer in the East who comes to pick up a package (nearly two hundred recently, but there are more every week) for their family or for an individual, has been thoroughly screened by the employees of the neighborhood teams. The entire administration of the customer must then be reviewed.

A row on the street

The first food bank in the Netherlands started in 2002 in Rotterdam. Many people were ashamed of it, and political parties shouted that it would no longer be necessary in the Netherlands in a few years. The opposite is true, the flow of customers is not decreasing, but growing. The aim of the food bank is to prevent waste – almost everything in the boxes is donated – and to help people living in poverty. Donations in kind come from supermarkets, large and small businesses and collection campaigns around Christmas, but also from young people in the East who bring a big bag of non-perishables every month or from people who donate cakes during Eid! It also happens that local residents bring a bag of hand-knitted hats and scarves.

Margreet Lukkien will be the coordinator of the food bank in Amsterdam East from 2020. East is one of the largest distribution points in Amsterdam. She sees that it is almost impossible to get a handle on the problem on Friday morning. It is a hopeless situation for both the customers and the volunteers to have to stand on the street. “It is a task to sort all the goods on the street. So the problem already lasts until half past three in the afternoon, it is simply not possible anymore. Two weeks ago we stood in pouring rain the whole time. We therefore have to throw away good things: all packages of flour were completely wet from rain. And just try to get new volunteers under these circumstances.’

Lots of stories about the food bank customers. There is no uniform profile for the customer. New arrivals are now freelancers without jobs, people who can no longer pay their energy bills, people in divorce and people who end up in poverty due to serious and long-term illness because they need expensive medicine.

Some clients are very positive and happy to have a group of volunteers there for them every week. Others complain to the neighboring team because they believe they have been disadvantaged: someone else got off more or better. Margreet: ‘Someone comes to me and asks for priority because she has to go to hospital. It doesn’t always go well: “Oh, I’m going to the hospital next week”, someone shouts. Another believes that the products are not in order and throws them to the ground. Then you step in, no one is going to throw away good things here. Or we explain that it really isn’t the case that the first customers get everything and the last get nothing. We share everything during the morning.’

The volunteers work long and hard on Fridays. At the end of the question, there are often still some rummaging around in the bins. They gave a lady some extra care items. Otherwise it had to go back. The following week, she raved about how happy she was with those things: “I traded them for cigarettes with my neighbor!”

Rather in a store

Margreet says that she is in the Zuid food bank store on Tuesdays. It is dry and hot. But a shop has even more advantages. Customers can pick it up themselves. They receive a number of points per article and one point per person. Maximum fifteen points. With those points, they shop according to their own taste. There is a very positive response to that. It is more precise: on the street you have small boxes (one or two people) and large boxes (up to very large families). 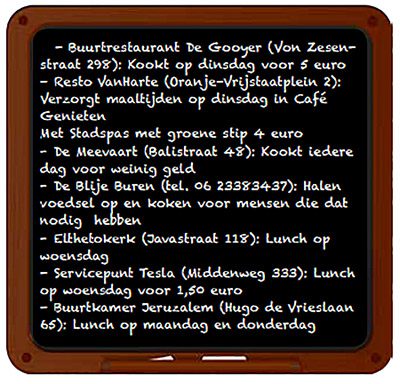 There is also space to offer clothes and other items brought by local residents. Once a month, all customers can also visit the social grocery store and select household items. Customers can drink coffee and tea there, so it is easy to have a chat and point out opportunities for people. There are many funds and other initiatives that you can appeal to if you don’t have money. Not everyone knows. And the store in Zuid is also a repair cafe.

Margreet and colleagues are now actively looking for an alternative to the outdoors. Preferably a place with enough space for a freezer and a cozy waiting area annex coffee & tea corner.