Hope you had a great New Year and that you still have all your fingers. Dangerous fireworks, the papers were full of this subject last December. However, the really dangerous fireworks did not come from Germany, Poland or China, but from Japan. The Bank of Japan (BoJ) has dropped a bomb on an illiquid market (due to the holiday period). The effects were felt around the world, but there is still a good chance that the real surprise is yet to come.

The bandwidth was 25 basis points (0.25%); in other words, if the 10-year yield were to rise above 0.25%, the BoJ would buy unlimited amounts of these government bonds, bringing the yield back to or below 0.25% (read how it works again here ). That was in April 2022 and the BoJ’s then newly announced actions have just been able to do their job. The BoJ now owns 50% of all Japanese government bonds. 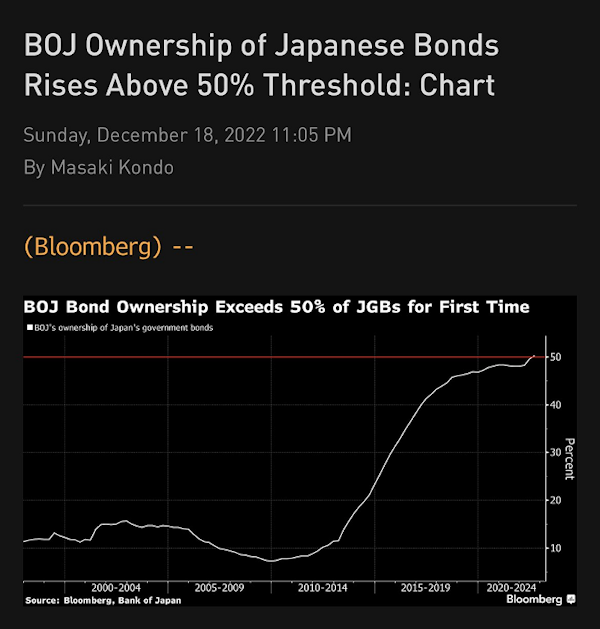 But then December 2022 came, and the pressure on interest rates was high again, and not just on the 10-year; Tensions could be felt across the entire yield curve (ie a combination of different maturities). The Japanese yen was the outlet, but an outlet can only temporarily ease the pressure and does virtually nothing about the cause: As other central banks (especially the Fed and the ECB) raised interest rates, the difference between Japanese and other interest rates. countries is increasing. This therefore created upward pressure on, among other things, the Japanese 10-year interest rate. In other words, the BoJ had to expand the bandwidth to bring the Japanese 10 more years in line with the other countries. And this happened, however unexpectedly, the 20th of December.

The news hit like a bomb; the yen jumped, as did the 10-year yield on Japanese government bonds, which almost immediately hit the new limit of 0.50%. Furthermore, Japanese bank stocks rose because they could now generate more interest income. 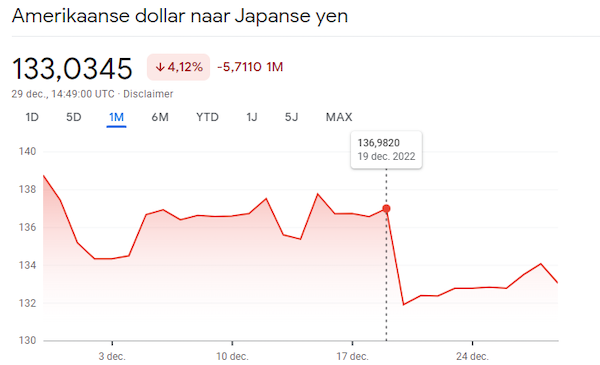 The press described this as a U-turn by the BoJ; the Bank of Japan was “hawkish”, like all other major central banks (except the Chinese one). But is this a correct conclusion? Indeed, the BoJ has also said it will buy even more Japanese government bonds to smooth out the “transition” (which is why rates were not set at 0.5% and have remained there). The BoJ thus increases its QE (Quantitative easing) which is the reverse of a tightening that the Fed is doing now; so it isn’t hawkish to name. So it seems more like that net net nothing has changed in terms of hawkishness and that this had nothing to do with the rising inflation in Japan, but with the stability of the financial market (something the Bank of England can talk about).

And there’s something most market participants have missed: the BoJ will not only buy UNLIMITED 10-year Japanese Treasuries at a maximum of 0.50%, but will also do so for other maturities (anything between 1 and 5 years). This unrestricted element (FRO; fixed interest ops) is new for these maturities and can truly be called big news.

The conclusion that can be drawn is that the BoJ is not tightening at all. Furthermore, the hair expands management of the yield curve (YCC) further until other maturities. The pressure on 10-year Japanese yields has now eased, but if the trend continues, the BoJ will have to buy more and more maturities indefinitely, while it already owns 50% of all government bonds. As long as the Fed and the ECB in particular continue to raise interest rates, the pressure on Japanese interest rates and the yen will increase; The BoJ will then buy more and more Japanese government bonds until there is nothing left to buy… Then it’s game over. And already the BoJ had to come up with unannounced buybacks; a wipe mark.

So it looks a lot like one play chicken where the BoJ runs head-on against the Fed & ECB. The only question is whether the latter know that the BoJ cannot take off the accelerator and that a crash can only be prevented by them.

Should they know this and act on it (so the Fed & ECB give the BoJ leeway by doing a monetary spin themselves), there is a good chance of a short-term (turning point-) party at the fair. However, the realist sees QE and YCC for what they are: irreversible. There is simply no way back for Japan, at least not without great pain in both the economy and financial markets. So even if a crash is averted in 2023, it will turn out to be postponed rather than cancelled.

The pessimist sees that the Fed and ECB will indeed continue to raise interest rates for a longer time, which could therefore lead to a Japanese firework disaster with global consequences. The optimist takes another donut and chants after Haze Junior “live like it’s your last day, live…” and the realist hopes for the best but prepares for the worst. Gold, anyone?