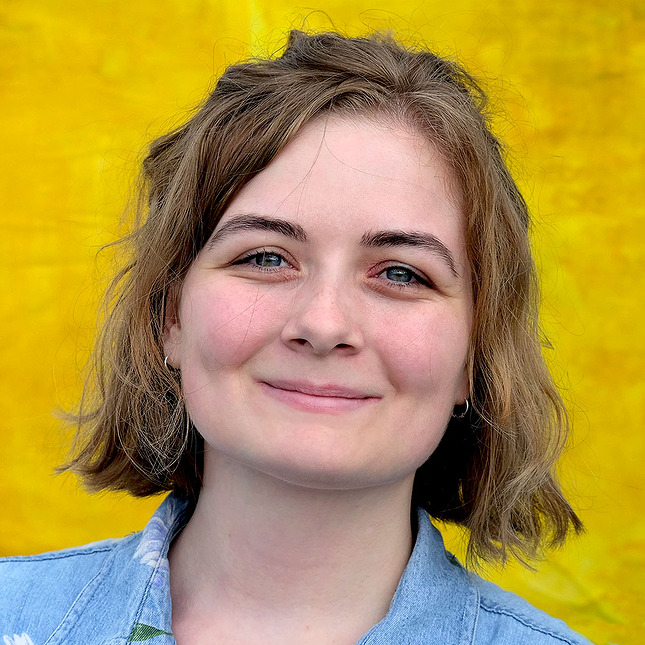 The field in which Marianne de Heer Kloots works sounds complicated. Maybe it’s because it’s actually a mix of other disciplines. And it suits the PhD student well, because mix language, artificial intelligence and brain activity with a good splash of basic curiosity and voilà: the CV for Marianne de Heer Kloots.

It started with an early interest in languages. “My mother is Polish, so I was raised bilingual. When we drove through Germany to Poland by car, I always found the words strange along the way. Why do they speak differently over there? Why don’t they just speak languages?”

This was reflected in her choice of study. But while studying linguistics in Leiden, she discovered that the way the brain processes language is also very fascinating. And that programming suits her: “The activity is just fun. You type something on the computer and something happens immediately. I noticed that I really got into a flow. All these different interests come together in my PhD research. It’s nice that we can study languages ​​in different ways. I chose this technical side.”

In short, the researcher just wants to know how language works in the brain and whether it can be compared to artificial intelligence. “I use language models: computer programs that have learned to recognize patterns in language because they have seen many texts. The model can make predictions based on these patterns. It can, for example, predict what the next word in a sentence should be, or generate new texts, for example. These types of models are often behind translation apps and, for example, the autocorrect on your phone.”

‘We must fulfill the good life differently’

The language models used by De Heer Kloots are built as so-called ‘neural networks’. These are computer programs that process a text by generating specific activations for each word that can be compared to the activation of neurons in our brains. These activations are expressed in figures where patterns can be seen. “I always read different pieces of text into the language model and measure how the activations differ. I compare it to the differences in brain activity of test subjects who read the same pieces of text in an MRI scanner.”

Comparing humans to machines sounds like comparing apples to oranges. Surely software does not have a comparable life experience with all the inputs of senses and emotions that come with it? That is certainly true, the researcher believes. “When people read a story, everything is involved, from recognizing letters to empathizing with the main characters. Such a language model works exclusively on the basis of statistical patterns in texts. Nevertheless, the model must extract some linguistic information from these patterns in order to make good predictions.”

The researcher uses brain scans from research carried out by American colleagues. They had test subjects read a chapter from Harry Potter while lying in an MRI scanner. These brain scans provide information about brain activity during reading. “We calculate the difference in brain activity between pieces of text. For example, if one sentence says that Harry Potter looks at his broom and another sentence says that he takes his wand, then both sentences have some activity for “Harry Potter”. The same bit of activity returns when Harry Potter is described as ‘he’, because subjects know who it’s about. But if ‘he’ refers to another character, the brain activity is different.”

She translates these differences into numbers that you can simply put in a table. She then looks at how the language model handles the same pieces of text by measuring the differences in activations and translating this into numbers. This way you get two tables that you can place next to each other. In such a table, for example, one could see that a language model understands, like humans, that the word ‘he’ with ‘three heads’ is not a ‘he’ referring to Harry Potter (see picture). 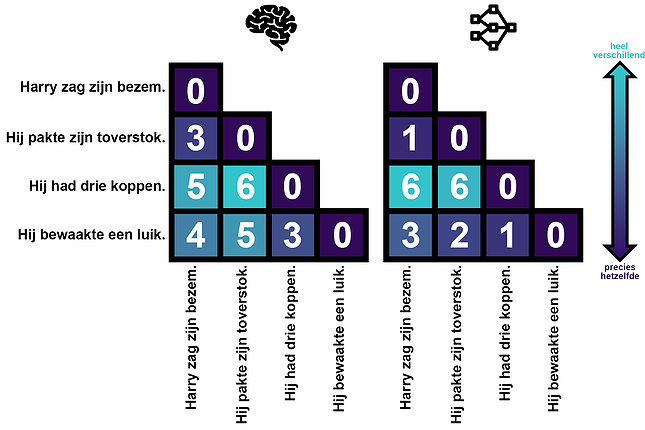 In this fictional example, the human and language model saw the same piece of text. On the left the brain activity, on the right the activations in the language model, both expressed in numbers and colour. The high numbers show that the ‘reader’ in both cases understands that the sentence ‘He had three heads’ is not about the one who sees the broom and takes his wand.

A lot of knowledge needs to be gathered to be able to make these kinds of comparisons. During the past year and a half, it has therefore been an important part of De Heer Kloots’ work to delve into different fields. “I have to understand these brain scans, understand artificial intelligence, understand how language and language processing work and compare all of that. It’s a nice challenge and it means I want to talk to a lot of other researchers. In my office at The AI ​​faculty, but also in the psychology department, where the MRI scanners are located, and the faculty where the linguists are located. So I also cycle back and forth a lot.”

It will not be less in the coming years. She wants to expand her research with models that, for example, process speech and images instead of text. “I also want to better understand which parts of models resemble brain activity more than others, and especially why. I think that’s the only way we can really gain new insights into human language processing.”

AI under the microscope

Her research fits into broader research in artificial intelligence. Algorithms and self-learning applications have become an integral part of our society, but it is no longer always clear how these programs arrive at a decision. It is twice as much as AI, agrees De Heer Kloots. “The downside of these types of models is that we can see what’s coming out and whether the prediction is correct, but it’s actually one big black box in it. We want to look in the black box to see what is happening, what information is important to arrive at certain predictions.”

This applies to many more applications that have nothing to do with language, but the problems of a language model are a good example. “We used to enter rules about grammar and spelling by hand. Now let’s teach computers what it takes to make good texts by giving them lots of examples. But not all conclusions are correct. For example, a language model can predict, that an author was talking about ‘his book’ while the author is a woman. We think it draws that conclusion based on the word “author” because “he” appears more often in sentences with “author” than “she”. As as scientists, we want to know if a language model really does reason that way, so we can improve it.”

Are you curious about how Marianne de Heer Kloots’ research is progressing? In a little while, Kennislink will visit her again to ask how she is doing. In the meantime, also read interviews with other PhD students from Language in interactionproject.

Read more about this topic?

Discover new articles related to this article. At NEMO Kennislink, we make relationships between articles visible so that you can more easily read other interesting articles.