During four Sunday afternoons, from 15 January to 5 February 2023 from 13:00-17:00, the versatile artist Rob van de Wiel and the felt artist Peti van Noort, both from Drunen, will exhibit their artworks in the culture tower Honsoirde in Nieuwkuijk: www.honsoirde.nl. There is free entry. They talk honestly about their lives and their art.

Peti met Rob when he participated in The route of art. Both turned out to work with natural materials, a binding factor that makes them comfortable with each other in their artistic expression.

Rob van de Wiel (52) from Drunen is an artistic man, self-taught and an enthusiastic storyteller. He owes his versatility to an inner drive, his absolute need for freedom. ‘In the distant past’, he says, ‘I had an office job (not for me), I worked in a clothing store that I regularly delivered to, and I was a truck driver for a while. Driving gave me freedom so I could go to the coast to surf.’

Gradually it became clear to him that he wanted something else, that life had more to offer him. It was thrown into his lap, as it were, thanks to his artist’s eye, his attention and love for the sea, the beach and nature, where treasures lie before him that few people see as he sees them. Stones of all kinds, but also things that people leave behind, such as plastic, rope, canvas, iron and wood. The beach is one big treasure chest for Rob, his artistic hands and his imagination do the rest.

Jewelery vs art
‘It started with making art,’ says Rob, ‘but by chance I came across a jewelery design.’ A found rock, a piece of wood, a creative process took place in Rob’s head that eventually led to a design, and another, et cetera. At the same time, that process prevented him from his great need to spread his wings, to feel the freedom to make works of art with heart and soul from all the beauty that nature offers him. Because if it wasn’t clear yet, that’s what he wants to focus on: making art.

Petit van North (58) calls the production of her felt artwork and consumables a hobby. She is a trained physiotherapist and works daily at a company for orthopedic materials. 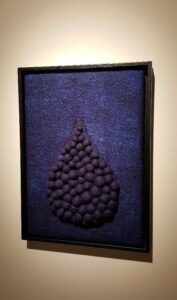 The drop
Peti takes the 3-year course at the Felt Academy in Essen, Belgium, and regularly participates in masterclasses with various Dutch and foreign artists. Like Rob, Peti gets his materials from nature: ‘For more than twenty years I have been making traditional felt from (usually) sheep’s wool, to which I add all sorts of other animal fibers, such as silk, and vegetable materials, such as cotton, bamboo or paper.’ The results are particularly beautiful. She has depicted some of them on Peti’s Facebook page, including the artwork De Drop, the work her mother bought from her a few years ago when she visited a gallery where Peti was exhibiting. “Although she regularly saw her daughter’s moving hands,” says Peti, “but now the result of that movement hung in a gallery in Baarle-Nassau, where this work of art apparently made a special impression.” How beautiful it must be to see your mother so proud and happy about something you have made yourself.

Source of inspiration
In addition to nature, her source of inspiration is also her family: her parents have passed on her love of creativity. But what fascinates her most about her felt work is that you can apply all kinds of techniques to wool, leading to different structures. And it all takes place in the traditional way. Making felt with the wet technique (there is also a dry technique) is to treat the wool with water, soap and friction ‘… a process that can be compared to the woolen sweater that comes out of the washing machine, set a little too hot’, says Peti.

Spun yarn
Recently, groups have emerged in several places in the Netherlands that spin the wool themselves and process it into functional products,’ says Peti. ‘Because you can make wonderful yarns and fabrics from wool. My heart is now primarily with felting, but how nice it is to still use the blankets that I knitted years ago from yarn spun from fur from sheep from the Drunense area. The whole process of cleaning, carding, spinning (on my mother’s spinning wheel) and knitting.’ Peti and Rob and their art as a natural connection, an impressive duo.

Start the day with news from your municipality with the free Newsletter. CLICK HERE and sign up. Leader of the local news.