An executive looking annoyed at all the petrol and diesel cars on the adjacent motorway. Employees who drive electric, or even don’t have a car at all. Who paints rainbow flags everywhere. Who are outraged that plastic waste is not sorted more neatly. No, this is not GroenLinks or Milieudefensie. This is Shell.

With hundreds of billions of euros in revenue, Shell is deeply intertwined with the lives of millions of Dutch and other citizens of the world. Not only when you fill your car with petrol at a Shell gas station, but also much less visible. The gas that Shell pumps up and trades ends up in central heating boilers and power plants. Shell chemical factories make all kinds of raw materials from the crude oil for the shampoo you use to wash your hair and for the mattress you sleep on. The whole of modern society bears Shell’s fingerprints. It is both a blessing and a curse.

Because although the use of oil and gas brings enormous benefits to humanity, the scale at which this happens is catastrophic for the climate. The amounts of oil and gas that Shell pumps up, processes and sells roughly account for a few percent of global greenhouse gas emissions (see ‘How much CO2 emit Shell?’).

How much CO2 does Shell emit?

For decades, Shell petrol has been a symbol of the freedom to drive anywhere, but today petrol and the oil it comes from is mainly seen as a major source of global warming.

It is not known exactly how many greenhouse gases come from Shell. All Shell refineries, installations and other activities emitted 60 million tonnes of CO in 20212 from; 7 million tonnes of this comes from Pernis and Moerdijk. For comparison: the Netherlands emitted 168 million tonnes that year. Shell also uses fossil fuel-generated power and buys other emitting products – a total of 8 to 9 million tonnes.

But the vast majority of emissions are due to the use of the products that Shell sells: petrol for motorists, the central heating boiler in homes. Shell itself estimated these emissions for 2021 at 1,299 million tonnes – a significant portion of the roughly 38,000 million tonnes emitted worldwide.

The Climate Accountability Institute estimates that Shell accounted for about 5 percent of global emissions in the 1970s. But total global emissions are now much larger. And now state-owned companies such as Aramco (Saudi Arabian oil) and Gazprom (Russian gas) are much larger emitters. 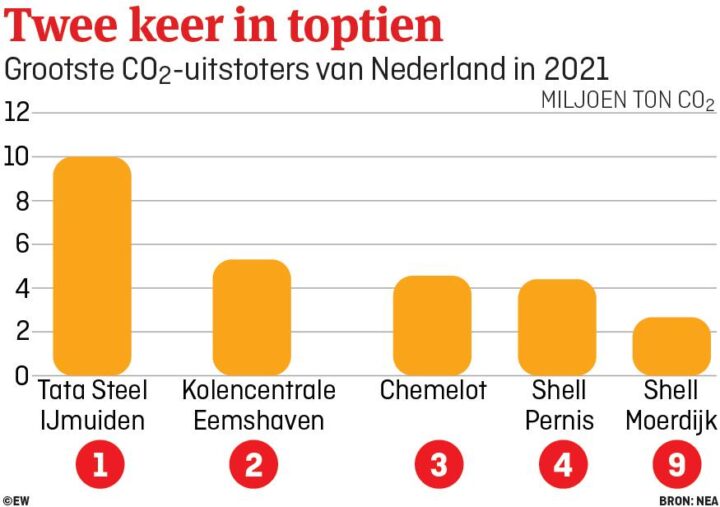 But Shell is becoming more and more a two-sided company. In the Netherlands alone, several green projects worth billions of dollars have been set up in recent years. According to the analysis agency SEO, no other company invests as much in the energy transition in the Netherlands as Shell (see ‘Billion Celebrations’).

Much is known about Shell’s oil and gas projects, but much less about the other side of the business. Therefore visited EW the places where Shell turns the energy system upside down. 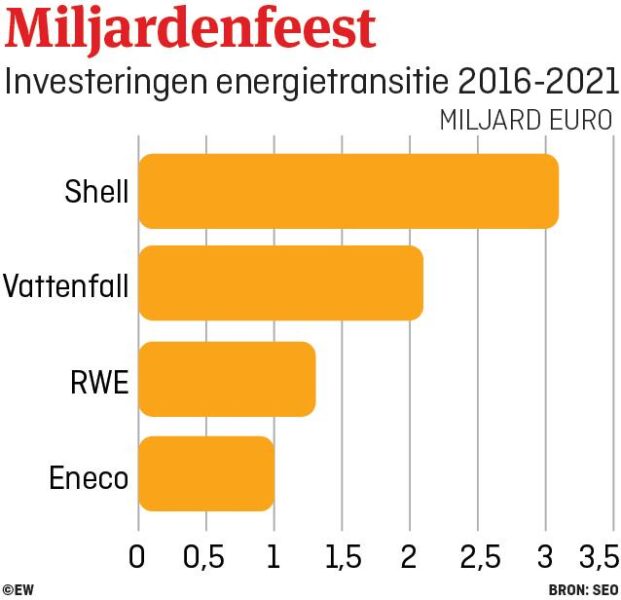 The change that Shell is making is perhaps the biggest at Pernis. Shell has established the largest refinery in Europe for 90 years on the 550 hectare site in the port of Rotterdam. A crucial link in the European energy system, where crude oil is brought in and converted by heating into products such as petrol (for cars), diesel (trucks), kerosene (aircraft) and naphtha (plastics).

But Pernis director Jos van Winsen’s (63) love for this fossil process has disappeared. “In the past I was more attached to fossil plants, but there are few people here who like to invest in the refinery,” says the Shell veteran. ‘I keep it in good condition but haven’t invested in it for two years. The money goes to the energy transition.’

It is not that Pernis has been abandoned by Shell, as it did with many other refineries. It is precisely one of the five ‘energy and chemical parks’ that survived a major clean-up wave. Van Winsen ‘in his own words smashes €4 billion’ on a new biofuel plant that captures CO2 and a hydrogen plant.

One would think that energy companies with a large fossil infrastructure would have the most to lose from such a major energy transition. But according to Van Winsen, it is the other way around. “Existing industry is a good basis because we can use existing infrastructure. If you want to maintain your competitive position and keep it affordable for society, you have to tackle it on a large scale.’

This can be seen in the biofuel factory that Shell has built in Pernis over the past 18 months. ‘We drive 6,000 poles’, says Van Winsen. From 2024, all kinds of natural raw materials, such as frying fat and plant residues, will be processed there into 820,000 tonnes of biofuels, such as biopetroleum and biodiesel. The advantage is that it can be used in existing planes and trucks.

In 2030, only a fraction of Pernis’ profits were from fossil fuels

You can read all issues and articles from as little as €9 per month EW. See our subscriptions.

Your session has expired