Bonaire, one of the Dutch Caribbean islands, faces major challenges, including managing (mass) tourism and population growth, preventing high erosion rates caused by constant grazing by free-ranging livestock, replenishing fresh water in the ground, increasing the use of renewable energy , adapting to sea level rise and extreme weather conditions, halting the loss of biodiversity and reversing the one-sided dependence on tourism. In thirty years, Bonaire will inevitably look different. Current trends will only exacerbate these challenges. Which alternative can alleviate the challenges and provide a better future for people and nature?

Two perspectives have been developed through a participatory process with key actors from different sectors. The view is the result of a series of design sessions, interviews and workshops with local experts, decision makers and researchers, supported by scientific data and field observations. For one of the forecasts, the current trends are extended into the future until 2050. For the second forecast, a vision for Bonaire in 2050 is outlined, where nature is intertwined in all sectors. This includes integrating nature-inclusive initiatives such as rooftop water harvesting, reforestation and greening of gardens using native species and growing local food. The researchers calculated how these measures would bend the curves of expected current trends.

If current trends continue, the population of the island will be twice as large in 2050 as it is today. The number of cruise tourists has almost quadrupled and the settlement is being expanded here. The demand for energy has tripled and the demand for water has almost doubled. Meanwhile, access to fresh water is becoming increasingly difficult and expensive with the dry climate. The free-ranging grazers continue to remove vegetation and further dry out the landscape. The city’s continued expansion makes it increasingly susceptible to flooding and land washing. The land is becoming less and less suitable for growing food, and the dependence on imports from outside the island continues. This dependence makes the island sensitive to fluctuations in world trade and market prices. The coastlines continue to build up, forming a continuous wall of structures, which in turn threatens the island’s tourist attraction. 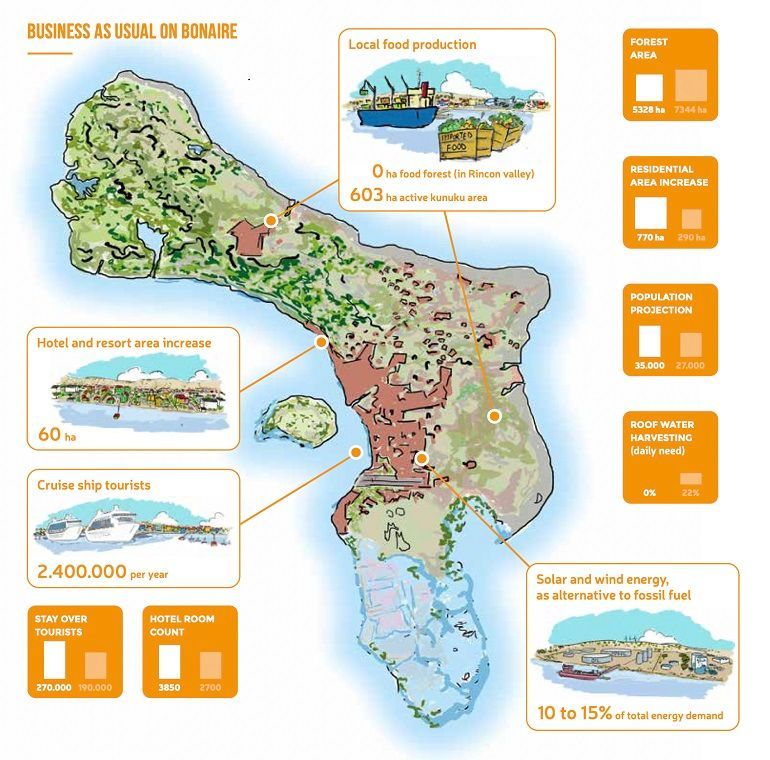 In a future where island politics and cultural change promote a beneficial partnership for humans and nature, the population of the island has stabilized. Urban expansion is limited to the currently designated development contours. Cruise ship stopovers have decreased and air passenger numbers and populations have stabilized, halting urban sprawl. There is a clear shift towards high quality (eco)tourism with family inns, boutique hotels and outdoor retreats. Most of the energy is generated by wind turbines. Households and business premises are equipped to collect rainwater and solar energy from the roofs. All collected energy is used via the urban grid, and rural areas store energy on site with batteries. This strengthens the island’s energy independence and reduces dependence on imported fuels. Water collected from roofs and in cisterns is used for watering gardens. It therefore reduces the energy required for desalination to produce fresh water. Ponds are also included in public areas.

All of these water containment measures reduce runoff from freshwater and land, protecting coral reefs from suffocation and excessive nutrient enrichment. Natural streams are free of human-made obstructions, and the areas around them are re-vegetated to reduce erosion and increase water absorption into the soil. New construction takes full advantage of the prevailing wind direction, shade and shade from vegetation to create a comfortable indoor climate and reduce the need for air conditioning. In new construction projects, the natural vegetation is kept largely intact; no full evacuations will take place until construction begins. Shade trees are planted on kunukus as fence posts so that the grasses are held back instead of roaming freely. The production of vegetables and fruit trees has become more common among local entrepreneurs. Fresh local produce is sold to local restaurants, hotels and supermarkets. Vegetable waste is used as feed for goats kept for meat in fenced farms. A food forest is being developed in the Rincon Valley, attracting ecotourism and local activities. Communities and schools also grow food together in community gardens, encouraging interest in home-grown food production and agriculture.

These prospects represent a range of possibilities for the direction Bonaire could take in the future and what can be done to steer it one way or the other. They form the basis for involving people in exploring possible futures and their consequences for society. This removes the blindfold to prevent the island from unwittingly ending up in harmful and unwanted future situations. Adding numbers to the outlook helps people envision what a desirable future looks like and how to achieve it.

These views were presented to the Island Council of Bonaire on 15 November 2022 and to the general public during the Nos Zjilea cultural event on 26 November 2022, where the work was approved by the Deputy Lieutenant Governor. 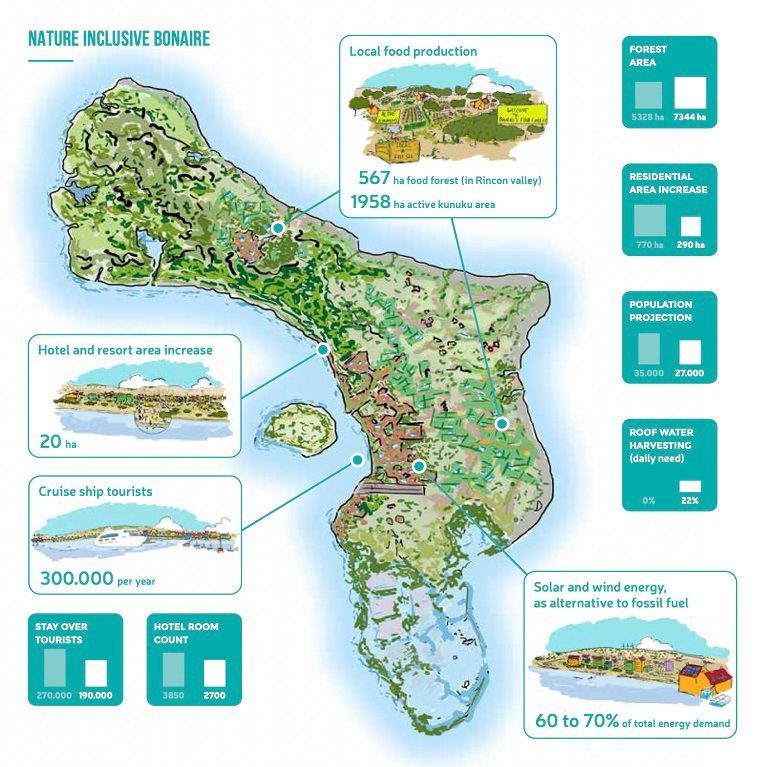