And suddenly you’re standing there, with a baby in your arms. From wanting a child to pregnancy to motherhood: Bringing a child into the world is one big roller coaster. Joris (32), Justine’s (33) husband, was on a flight back from New York when she gave birth to their baby five weeks early. They are now the proud parents of Basile.

“Getting pregnant was a piece of cake,” says Justine. “In 2020 we had to deal with two pregnancy losses. I was working in the ICU in COVID at the time, which was obviously very stressful. I don’t know if that had anything to do with it, but after my last curettage there were complications that required, that I went under the knife. After that it was no longer possible to get pregnant naturally, so we went to a fertility clinic.’

‘First I started with hormone therapy, but after a few months it turned out that this didn’t work,’ says Justine. “Then we switched to artificial insemination. The first time I thought it was very strange. I was lying on a bed with my legs open with all kinds of people around me like a midwife, gynecologist, assistant and student I didn’t know and it was done in barely a minute. I felt very defenseless, but luckily Joris was by my side.’

Joris and I reacted differently to the failure of the inseminations. While he always remained positive, I always ended up in a negative spiral, so little by little we grew further apart.

‘When you’re at home, the agony starts, because then you have to wait,’ says Justine. ‘The first time I woke up a little nauseous, of course I thought it was time. But the stomach cramps unfortunately pointed to my period. At that moment, your world comes crashing down, because of course you want to be pregnant. I have long wondered why this should be, because my husband and I have been examined and we are fine. But of course no one can answer that.‘

“We kept working up the courage to go through with another insemination,” says Justine. ‘Joris and I reacted differently to the failure of the inseminations. While he always remained positive, I always ended up in a negative spiral, so little by little we grew further apart. I really didn’t see it getting any better and was convinced we would never be able to have a baby. We therefore decided to talk to a psychologist, and it helped us communicate better and find each other again.’

‘However, after the fourth insemination I had had enough,’ says Justine. ‘I needed some me time and went to Malaga on my own for a week. It was the best decision ever, because I came home fully rested. Two weeks later it also turned out that the last insemination was successful, because I had a positive pregnancy test in my hands! Joris and I didn’t dare to get too excited at the start for fear that something would go wrong again. It wasn’t until I was five months old and we heard on the ultrasound that our baby was in top shape that we dared to tell everyone. We could finally be happy and shout it from the rooftops, what a relief!’

“I had a very smooth pregnancy,” says Justine. ‘I had no ailments, I was allowed to eat everything and I only had a small stomach so I could do everything as before. That’s why I really wanted to be pregnant. The baby thought otherwise, because he was born five weeks early. It was so unexpected that my husband was even abroad. He was traveling with friends in New York when my water broke. While I was looking on Google for what to bring to the hospital, I called Joris to tell him the good news.’

The baby was born five weeks early. It was so unexpected that my husband was even abroad. He was traveling with friends in New York when my water broke.

‘My family lives in Wallonia, so luckily Joris’ father was able to take me to the hospital’, laughs Justine. ‘I wanted to do everything I could to make sure our baby wasn’t born until the next day, because then Joris would be back. So I did everything I could to prevent anything from happening and didn’t even get out of the hospital bed. Meanwhile, I even video chatted with my husband, who was still walking around New York, and he showed me the skyscrapers (laughing).’

“At night the contractions suddenly started to get stronger,” says Justine. ‘I tried to ignore it but the midwife saw I was already nine centimeters dilated so the baby was on the way! I called Joris one last time, he was ready to board at the airport. At that moment, we both realized that unfortunately he would not be at the birth of his first child. Fortunately, my mother helped me and twenty minutes later our son was born. I was allowed to take it out myself and my mother cut the umbilical cord. A wonderful moment!’

“Basile was immediately taken to the incubator,” says Justine. ‘He weighed just under 2.1 kilos and was 44 centimeters tall, but he was fine. I took a picture and forwarded it to Joris, who immediately wrote back that he was over the moon, literally and figuratively. He celebrated on the plane with champagne (laughing). The next day, Joris was in my room with a huge bouquet of flowers. We flew into each other’s arms and the tears flowed freely’.

‘The first weeks were happy, because Basile slept well and ate like a horse,’ says Justine. ‘Joris also took four weeks’ leave, and we had really found the balance as a new family. When Joris had to go back to work, I completely lost the structure. Suddenly Basile started crying a lot, he didn’t want to sleep anymore and he was constantly hungry. It was hell!’

When Joris had to go back to work, I completely lost the structure. Suddenly Basile started crying a lot, he didn’t want to sleep anymore and he was constantly hungry.

“I was completely exhausted,” Justine said. ‘My in-laws suggested I follow them to Spain for a week and that was my salvation. I could drop off Basile without worries and catch up on some sleep myself. Slowly I found a new rhythm, where Joris helps as much as possible, because I can’t take care of Basile alone. So far we don’t know if we will have another child of our own. We are also considering perhaps adopting a child or to take in a foster child, but at present it is far too early to decide anything about it.’

Joris and I went on a babymoon to Malaga. We stayed there for three wonderful weeks. I could rest and Joris could work remotely by the pool. During the day I went out alone and in the evening we enjoyed the remaining time together just the two of us. On our penultimate day, he arranged a photoshoot on a small beach. Usually that’s not our thing at all, but this was a unique moment. I am really super happy with the result. 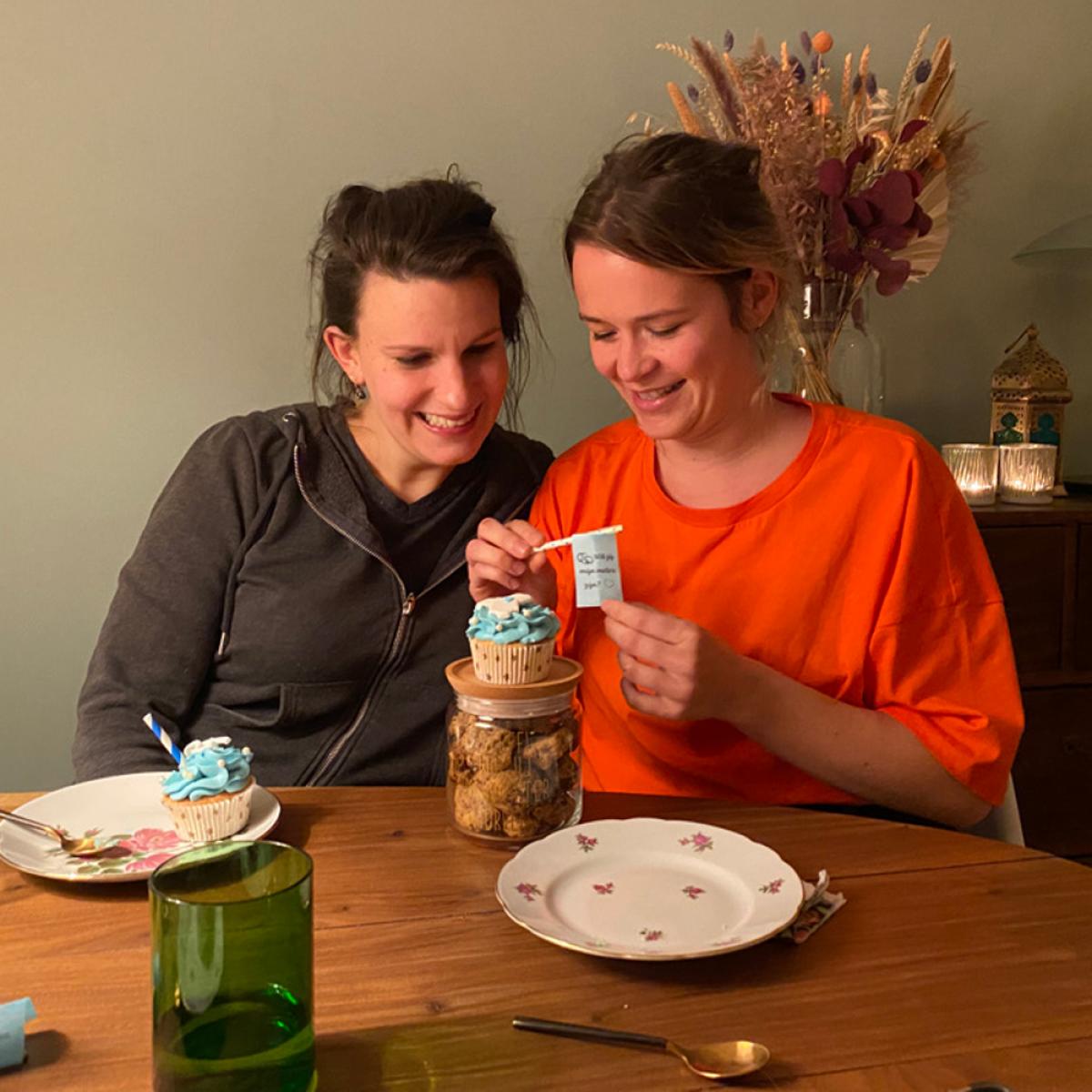 One of my best friends Steffi is Basile’s proud godmother. I asked her with homemade cookies, I love to bake! 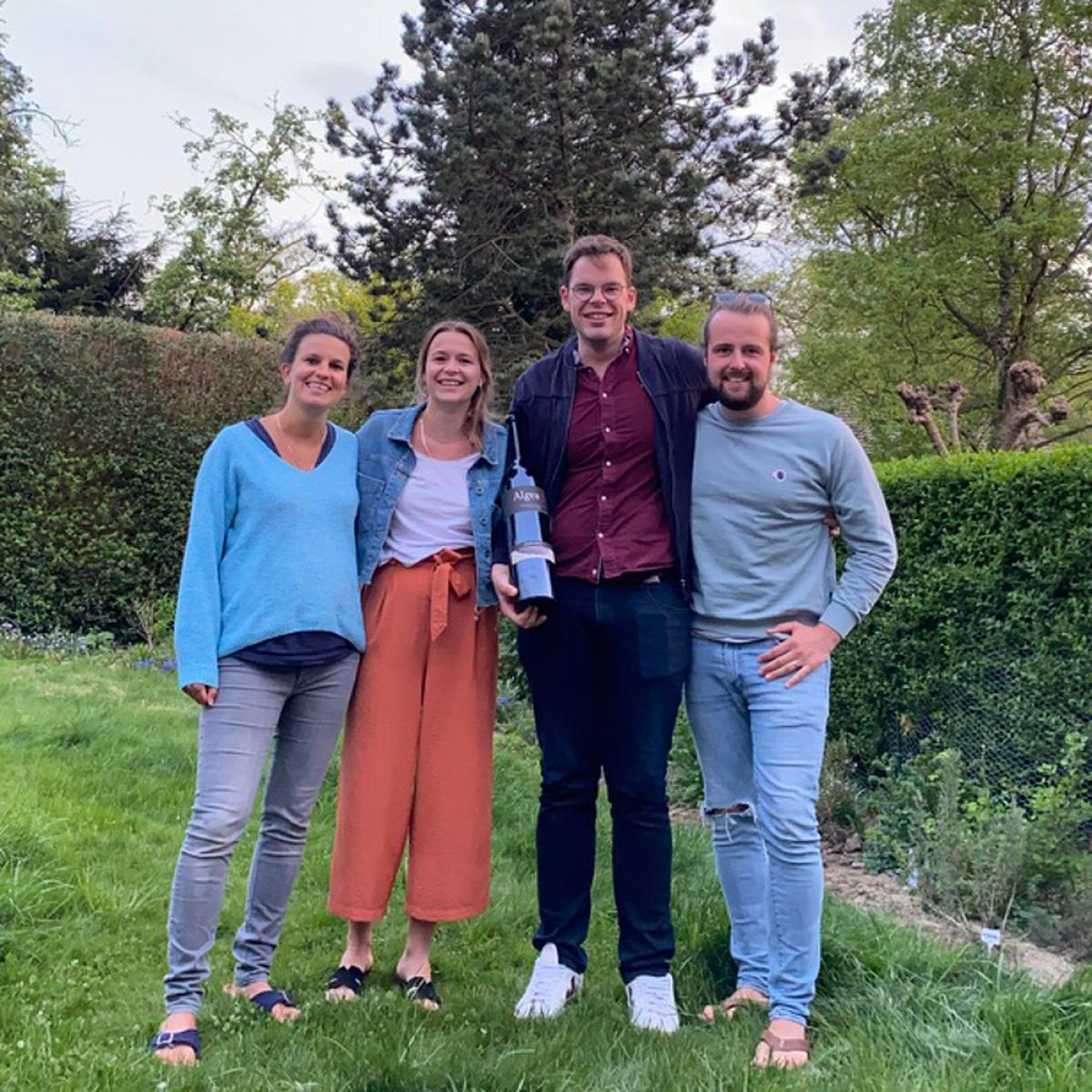 Steven is the proud godfather. I also asked him with my delicious cookies and a bottle of wine. He also said a resounding (pun intended) yes. 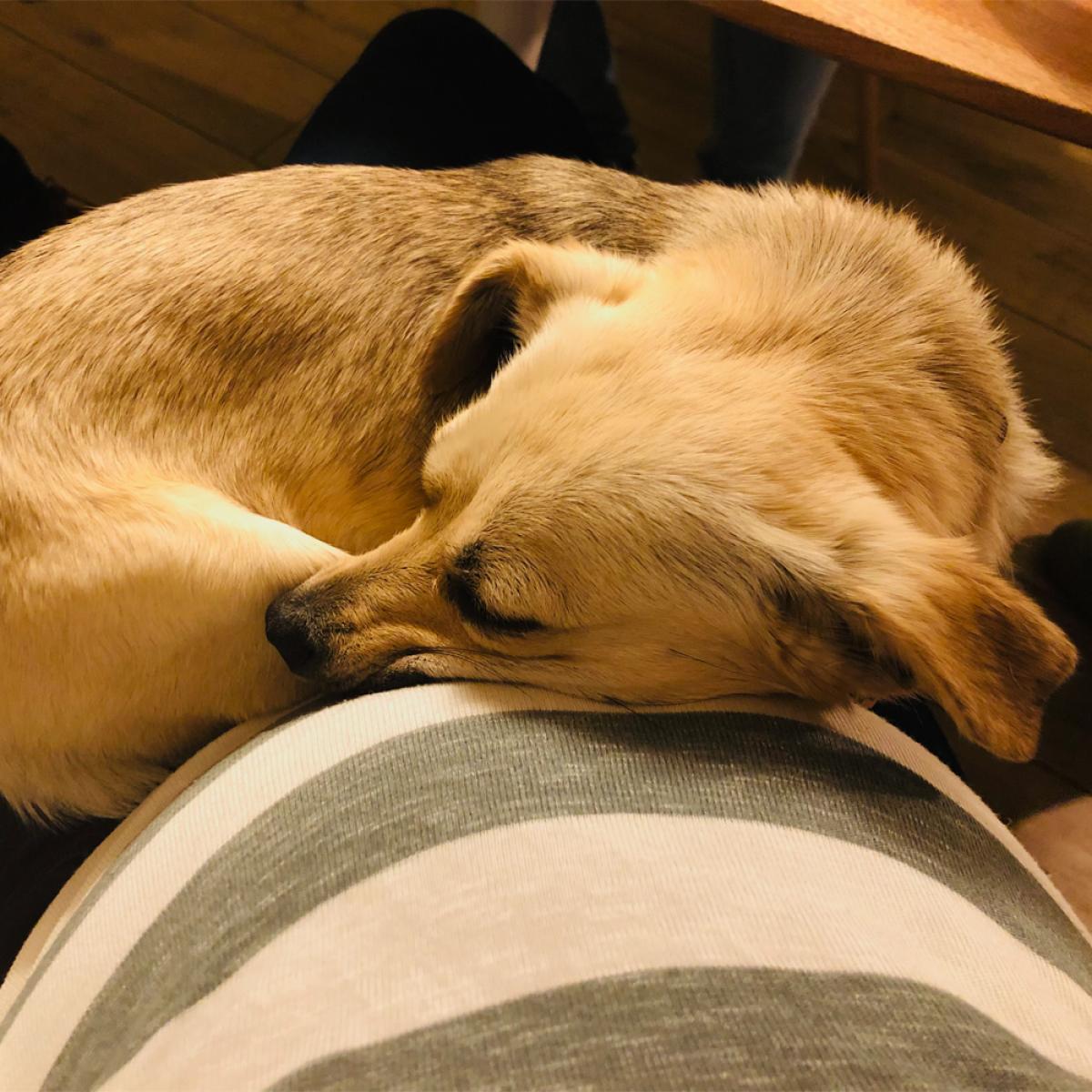 Our dog Lola is an adopted dog from Romania. She was severely abused and is still very anxious. With Basile’s arrival, she blossomed completely. She sees him as her baby and wants to be with him all the time. She takes care of him even when he was still in my belly and it’s so beautiful to see! I’m sure they will become the best of friends! 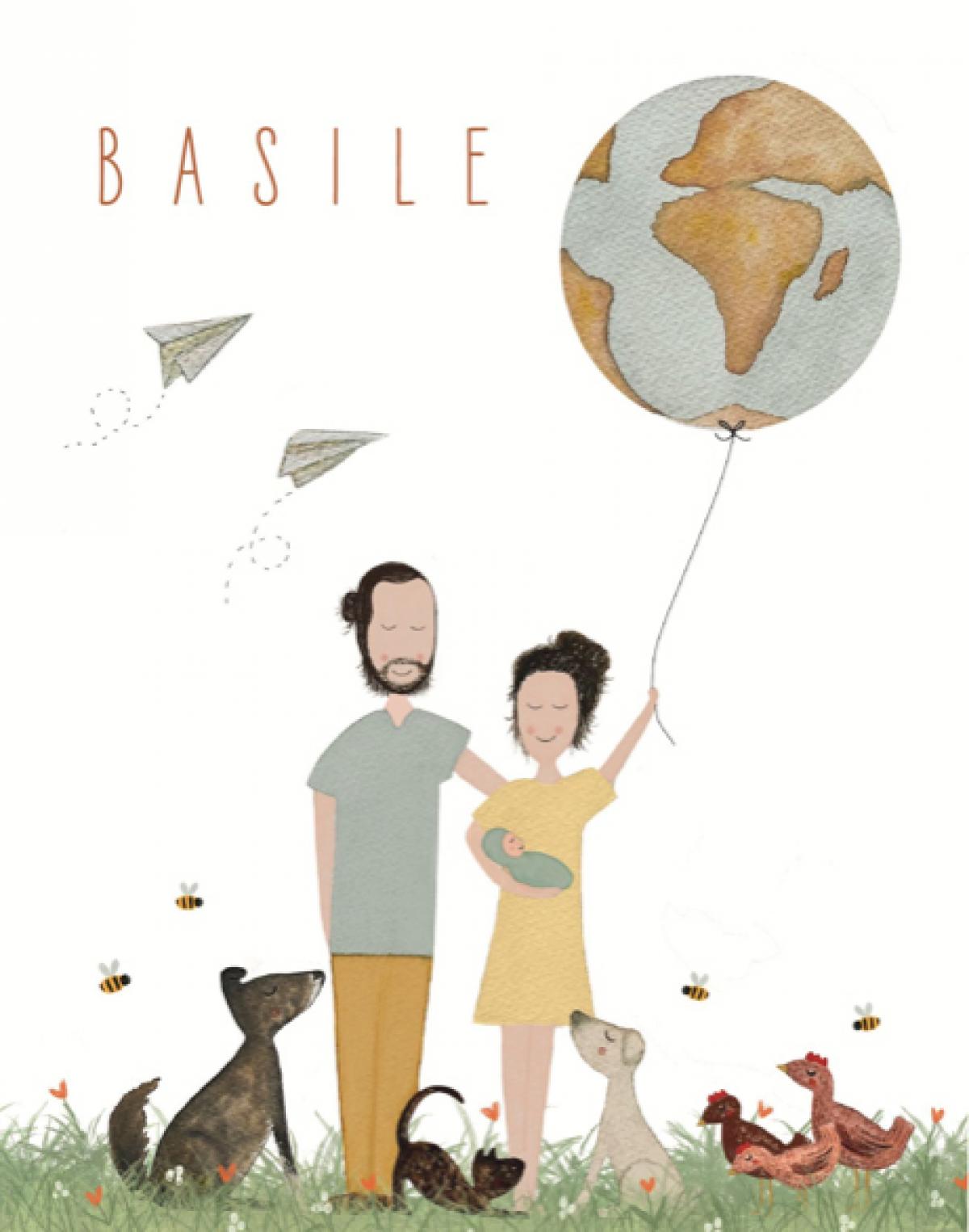 On the birth announcement you see Joris and me, accompanied by our adopted animals. The bees symbolize the four inseminations we had to go through to get Basile. We lost the two planes for the two children and the globe because we both love to travel. The card was designed by Ann-sophie Snoeck from Atelier Surtout.

Facetiming from a hospital bed 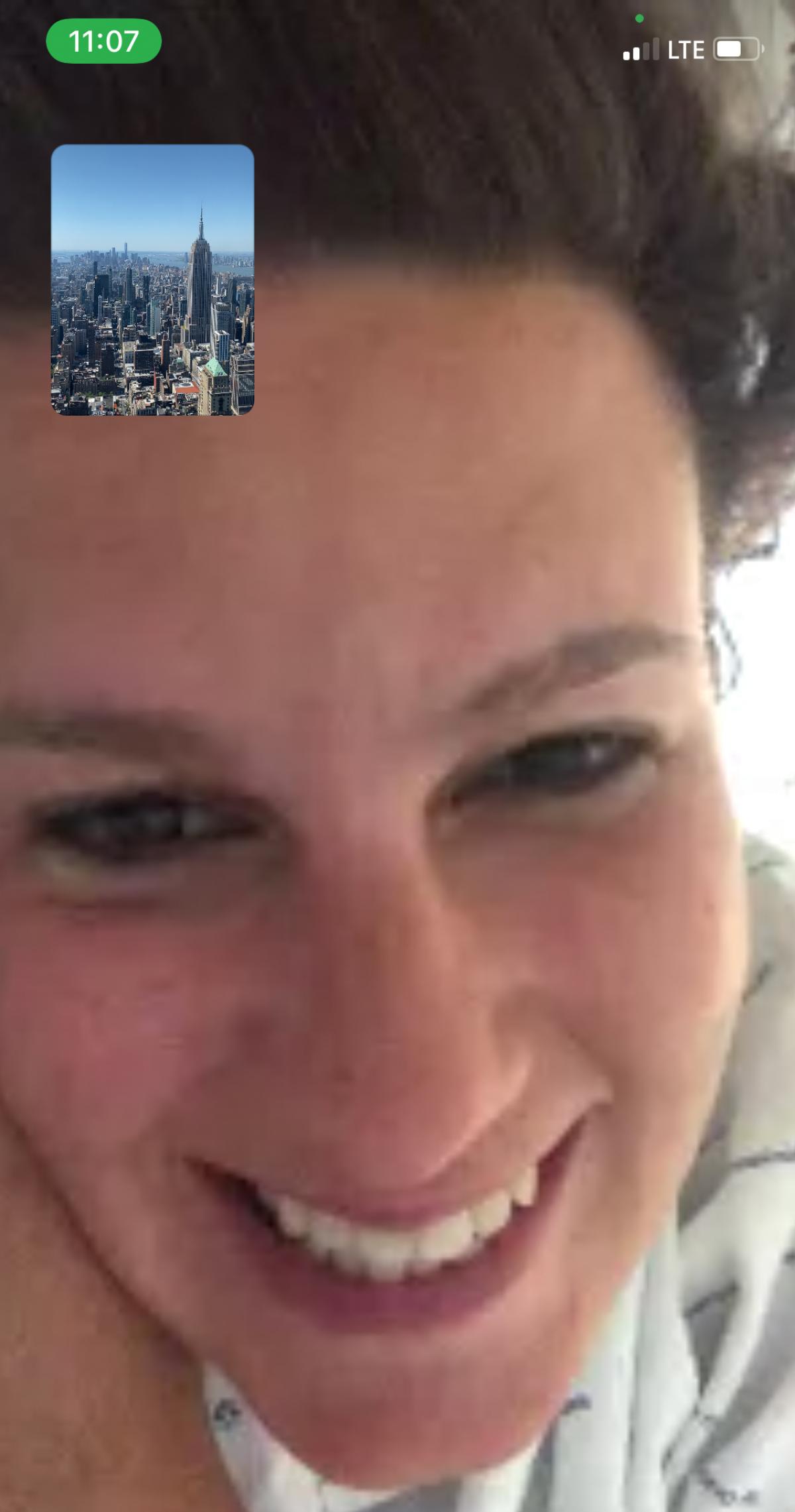 Facetiming from a hospital bed

When I was lying in the hospital bed in the delivery room, Joris showed me a piece of New York.

Champagne on the plane 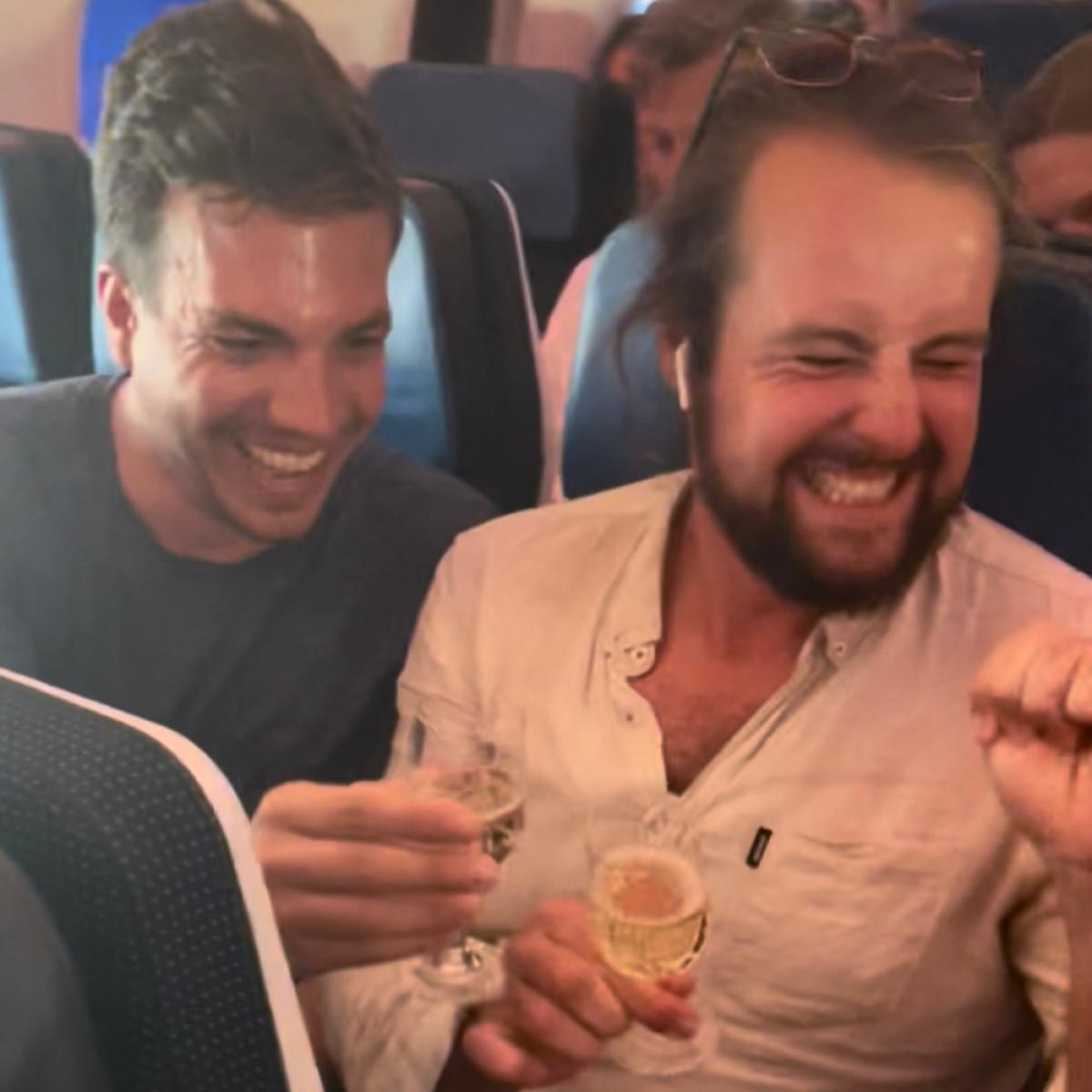 Champagne on the plane

Joris celebrated the happy news that he had become a father on the plane with his friends and lots of champagne. 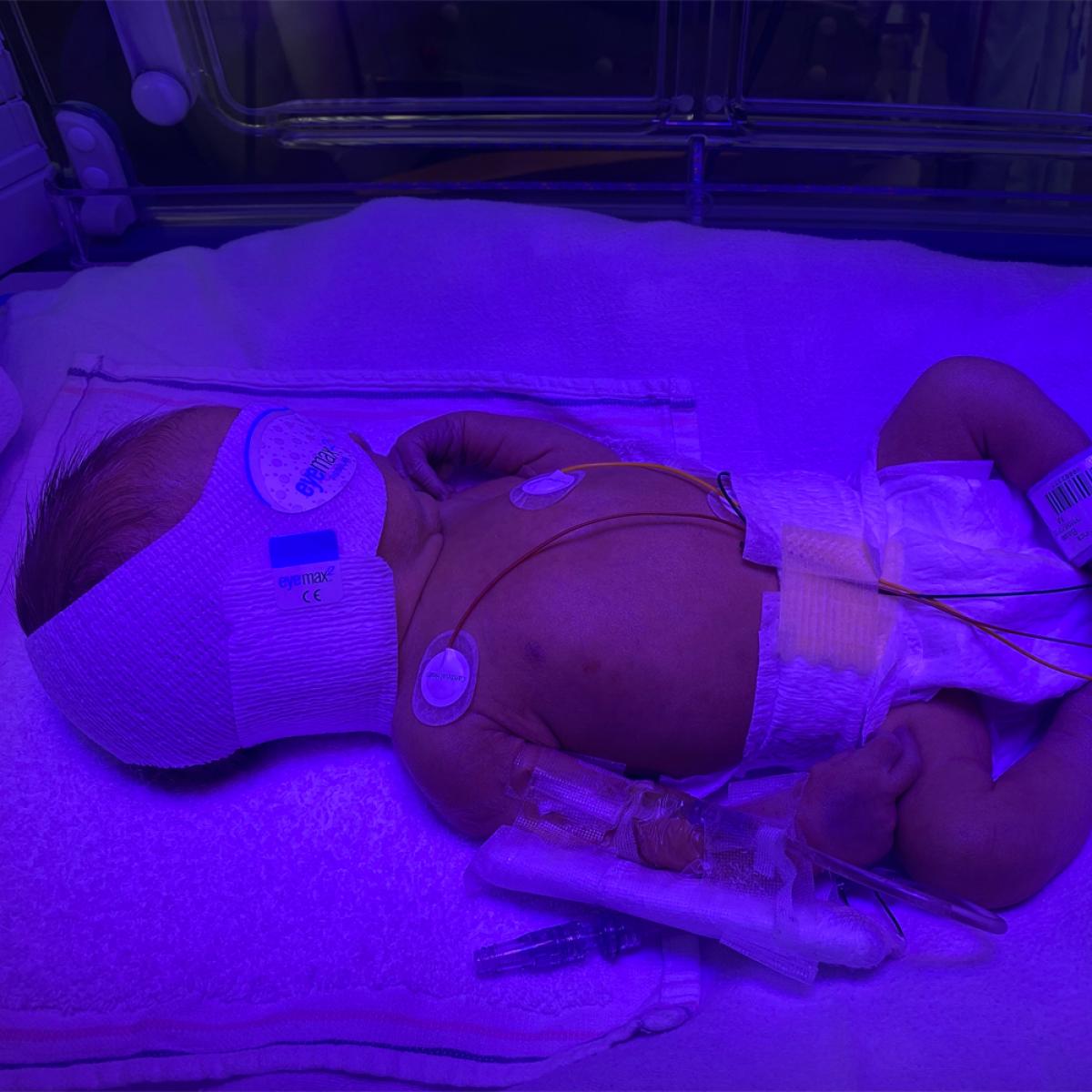 Basile still had to lie in the incubator in neonatology under a special blue light for a while. 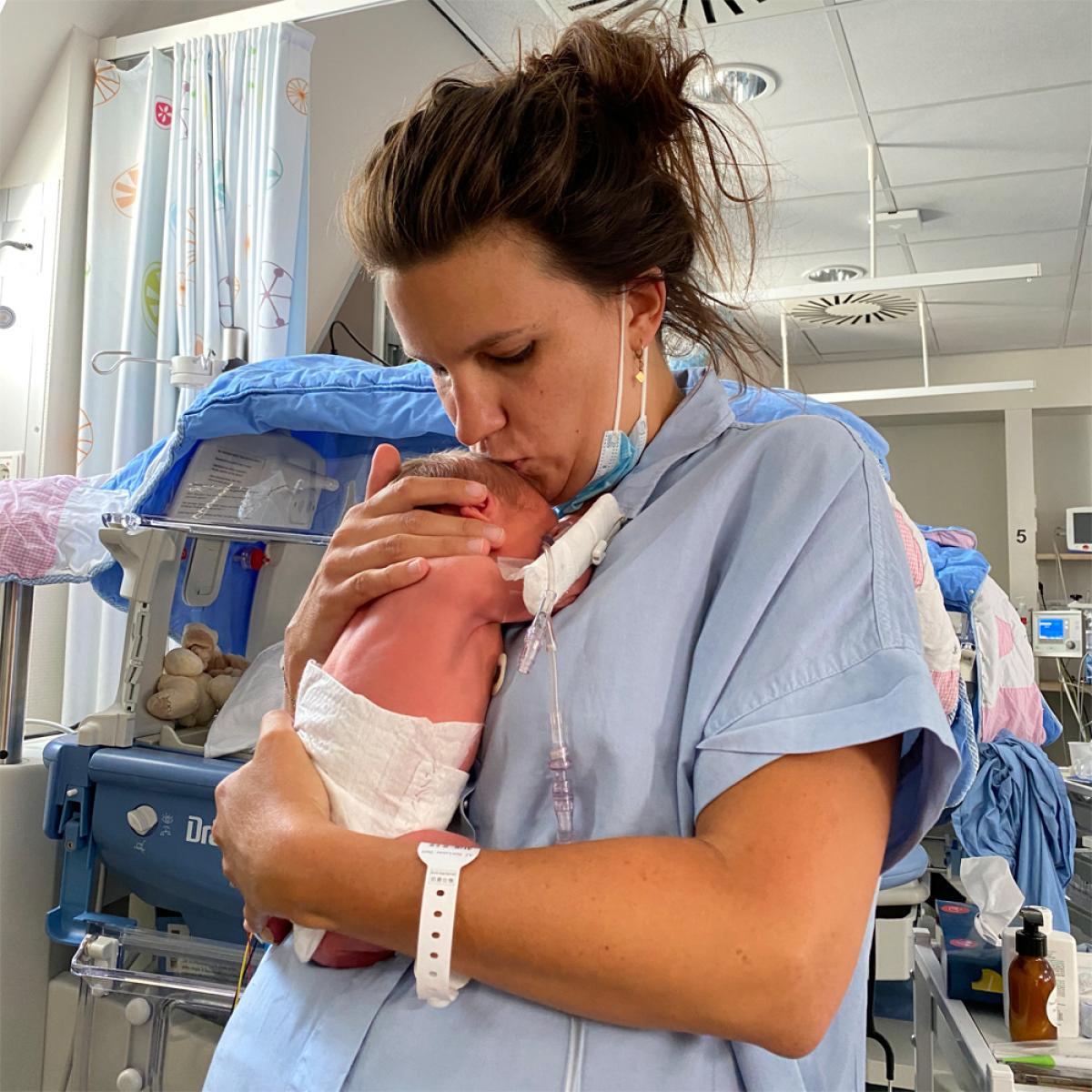 I showered Basile with hugs. 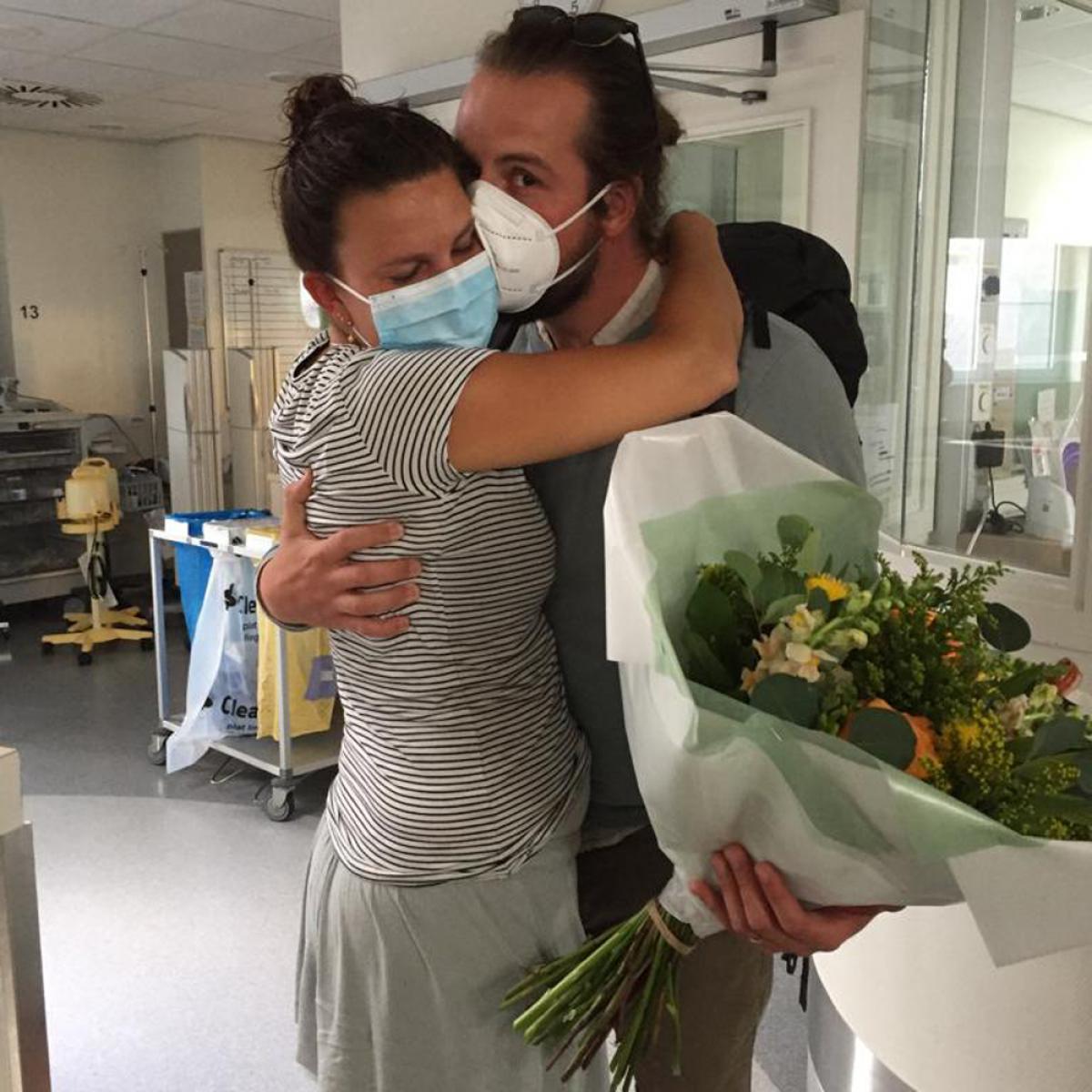 The moment we saw each other again was very emotional. We were parents! 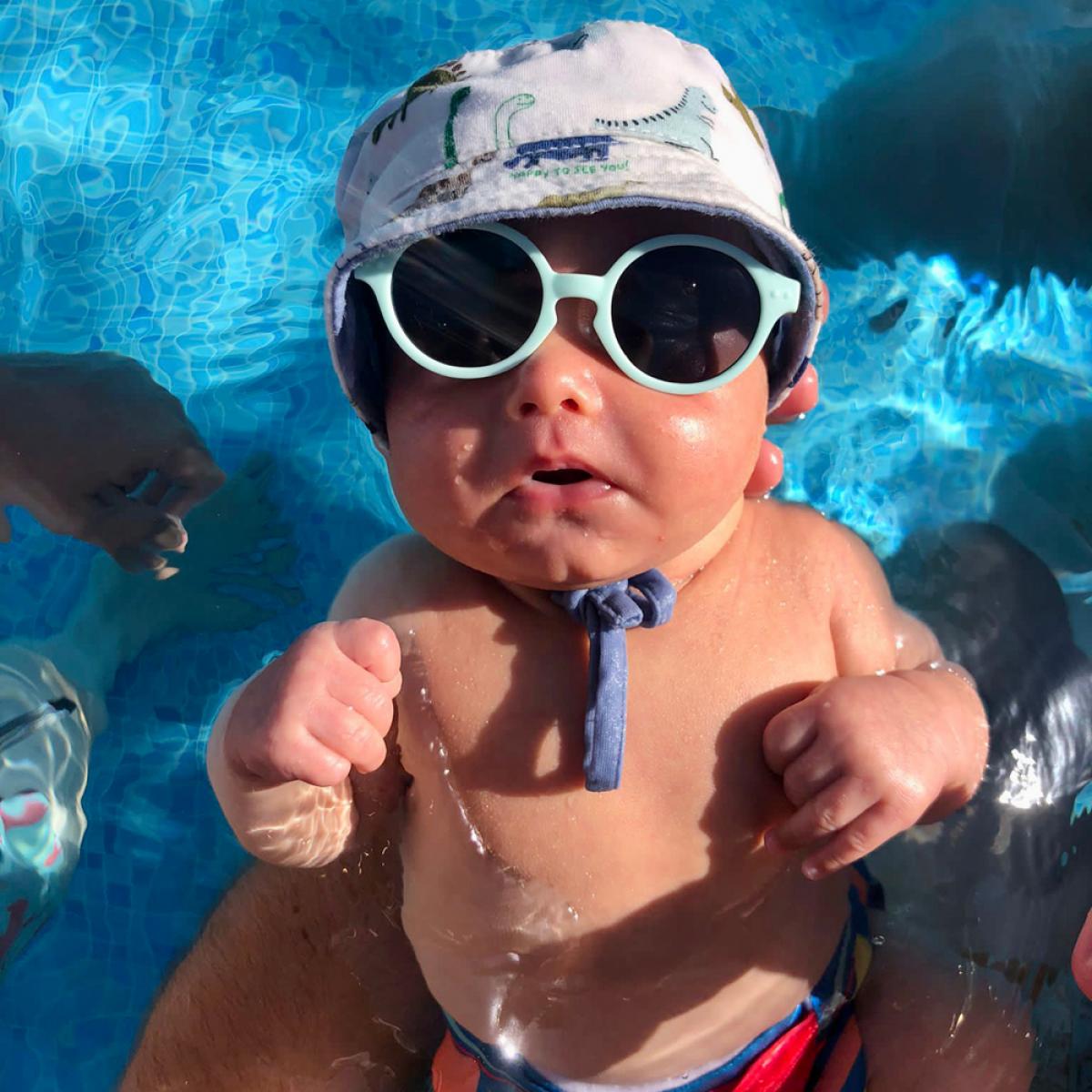 Basile’s first trip to Spain when he was seven weeks old. He slept the entire flight and enjoyed the Spanish sunshine to the fullest.