REPORT – The Amsterdam Museum has a temporary new home. Due to a major renovation, the museum has moved from Spui in the center to Amstel. The Museum Hermitage offered the team and collection of the Amsterdam Museum a safe and inspiring place to live until 2025. In this new home, my attention was drawn to the Maasdamme collection. Rita Maasdamme (1944-2016) uses stories with 200 puppets to show scenes from our colonial past. For Kunst op Zondag, I wondered what we can learn from Maasdamme’s representation of the colonial and slavery past?

In the exhibition, Bianca Maasdamme (audio tour) tells her sister’s life story. Rita Maasdamme was born in Aruba in 1944. Their parents are originally from Suriname but emigrated to Aruba. At the age of nine, Rita starts making dolls out of cloth, which she dresses up in different costumes. In 1963, Maasdamme moves to Amsterdam to train in fashion. After graduating, she works as a needlework teacher at various schools in Amsterdam. From 1983 onwards, Rita immersed herself in the history and culture of the Antilles, Aruba and Suriname. In combination with this, she takes up making dolls again. She therefore begins to make dioramas (3D representations). Rita Maasdamme shows stories and ceremonies that are not mentioned in Dutch textbooks. With these 3D performances, she exhibits in community centers, schools and museums, both in the Netherlands and in Aruba.

When artist/activist aunt Rita Maasdamme dies suddenly in 2016, she leaves behind dozens of dioramas with more than 200 dolls and a large collection of clothes. Her family faces the challenge of continuing her work. They find a partner in Buro Imagine IC. This body negotiates with various organizations about the composition of Amsterdam’s collective memory. Dieuwertje Wijsmuller is given the task of investigating the value of the Maasdamme collection. Her findings are included in this report. The exhibition is a follow-up to this research. When the exhibition closes on March 12, 2023, the family wants to transfer the collection to museums in the Netherlands, Suriname or the former Netherlands Antilles. The question is: ‘Where does Rita Maasdamme’s life’s work come into its own?’

Diorama with Buchi Fil a plantation slave who does not greet his master in the morning © Rita Maasdamme © photo Wilma Lankhorst.

What do you see in the dioramas?

In her collection of dioramas, Rita Maasdamme tells about the history of the Dutch former colonies in a very personal way. She does this from the perspective of the enslaved, the maroons and the indigenous population. Maasdamme shows us a piece of shared history that she and many of her peers, here and in the former colonies, never learned at school. The themes range from the slave trade in the port of Paramaribo, a maroon village, the uprising in Tula, the spread of the Christian faith to more contemporary scenes such as a representation of the prostitution village of Campo Alegre on Curaçao.

Creatures in the main role

Maasdamme herself preferred to call her dolls beings, out of respect for her work I will also use that term from here. In the various dioramas you will get to know more than 130 creatures. The creatures are pure craftsmanship and made entirely of fabric. Rita Maasdamme has studied history, environments and people in depth and has recreated everything down to the smallest detail with different materials. Pay attention to the nails sometimes with a varnish and the lips, which have a different color on the inside. She has paid close attention to hair, eyebrows and eyelashes to bring the creatures even more to life. 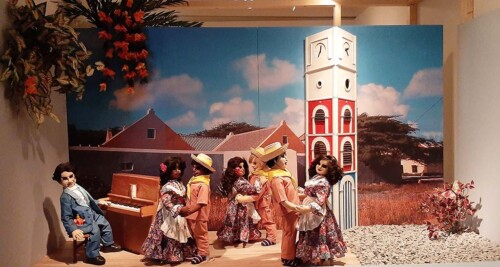 Inez van der Scheer, Junior Curator of the Amsterdam Museum says of the artist/activist: “Rita Maasdamme was a forerunner as an artist and educator and made her diorama‘at a time when this theme was still greatly underexposed. Driven by a strong sense of social justice and equality, she lovingly made her life’s work: underexposed stories in fabric and thread. For this, she undertook extensive research and translated everything from historical prints to poems and urban legends into her narrative diorama‘p.”

Rita saw in her creatures the means to share knowledge and stimulate understanding. If possible, she herself was present at the (travelling) exhibition. At the end of the exhibition, you can see an example of a suitcase that she designed herself to transport the dioramas. During the exhibitions, Aunt Rita took the opportunity to talk to people. Unfortunately, Maasdamme can no longer give tours itself. The museum team has sought additional voices and visions. Scientists and poets, anthropologists and family members complement the stories of the dioramas with their contemporary perspective in the audio tour and the videos. On the walls are statements by, among others, Britha Reiziger, Bianca Maasdamme, Stacey Esajas, Vernon Chatlein, Ola Hassanain, Emmanuel Adu-Ampong, Luc Alofs, Marco van Baalen, Kathleen Ferrier.

What can we learn from this?

After seeing all these performances, the question keeps ringing in my mind, what can we learn from the Maasdamme dioramas? Rita Maasdamme shows different sounds from the Caribbean in her 3D performances. In addition to Suriname, Aruba and Curaçao are also discussed. All dioramas are provided with information boards, so you can read that there were differences between the islands in terms of working conditions. For example, Aruba did not have a true plantation economy with large-scale slavery. Here the slaves mainly worked in the household and took care of the maintenance of the gardens. Then there is the explanation for the flight to freedom. Maasdamme shows a reddish-brown village from the Surinamese interior. These villages were founded by the slaves who had escaped. They were called marron and built their new village in the almost impenetrable jungle. I learn that marronage is an act of resistance to slavery par excellence. For Rita Maasadamme, marronage was a great source of inspiration for her work. She shows in the diorama with Buchi Fil that slaves also resisted their masters. Thus Bunchi passed his master’s terrace daily without hat and salute.

You can explore the story of Rita Maasdamme and her 200 creatures until March 12, 2023 at the Amsterdam Museum aan de Amstel (temporarily in the Hermitage building).

© text, photos and video Wilma Lankhorst
© used from the images courtesy and permission of the Amsterdam Museum, the heirs of Rita Maasdamme and all lenders.